I think it is safe to say that spring has finally sprung, the sun is shining, the birds are singing, and the bitterly cold north wind has been blowing. So, it has still been three layers of clothes, winter boots, thick coat, woolly hat, and gloves whenever you go outside, but at least it is dry. The grass has been rocketing away, everywhere is now green. I have let the alpacas out of the paddocks into small, fenced areas to eat the grass, they get about three days before I move them again to stop them scalping the grass so early in the year. They love it, and I love to see them run out of the paddock in the morning to the grass and the girls have even been pronking around in the evenings. (For any new followers, pronking is when they look like they are bouncing on all four legs) However spring for the boys usually means chasing each other around in the evenings and fighting (usually playfighting), it happens every year without fail at this time.

I am going to fence off an area around the oak tree hill for the girls to use and the fence posts came last week, just need to get the wire now. I used some of the posts to create a permanent corridor between the two girl’s paddocks so they can mix and share grazing areas. I am hoping it means they can still mix in the winter as I can use the snow blower to keep the corridor clear. At putting away time Vanessa’s girls make their way to their house and Aggie’s girls to theirs, I have them well trained.

I have been taking the alpacas out for walks to get them back into the swing of it again, they usually don’t take much persuasion to go. They know they get to eat grass on the way. It’s not often I get to take Aggie for a walk, and I always feel quite emotional when I do. Last few years she has been pregnant or been feeding and I don’t walk them then. She was the first alpaca I trained to walk and even though she is not walked often she still remembers what to do. She will walk steadily alongside you and respond to commands. I used to walk her a lot when she was small, so it brings back many good memories. I must admit Aggie is my favourite alpaca even though she can be a pain in the bum at times, but she was our first cria and I learned such a lot from her.

Big news is the vet came to scan the girls and Ilvija and Amanda are pregnant, cria due mid-June to beginning of July, but Silla and Valeria are not which is what I suspected from their behaviour when the boys escaped and got in with the girls last year. While the vet was here, she also castrated Freddie. His fleece has never been wonderful, and he has inherited his mums skin issues as well as having a weak knee ligament which is also inheritable, so we were never going to breed from him. He is quite gentle and sweet but towards the end of last year and in the very early spring this year he has been the instigator of many of the fights with the boys so we decided it might be best to have him castrated. He was on his feet and eating after about 20 minutes and has shown no aftereffects at all. It should take around six weeks for the testosterone levels to fall. He is still currently joining in with the boys fighting, I keep telling him to watch those stitches.

Now we know which girls are pregnant we have started the process of mating some of the others. I am trying Josefs and Jakobs for the first time. Josefs was pretty good and knew what to do, but Jakobs was a little slower. It is so funny with the young males until they get more experienced, you have to keep turning them around, “no not that end, try this end, you need to be a little further up” etc, I never thought I would need to be an alpaca sex therapist.

I was beginning to get a little worried that the fleeces this year hadn’t grown a lot but then suddenly over the last two weeks, boom…they seemed to have exploded. They all look so fluffy and long now, it always seems such a shame to have shear them.

The dawn chorus of bird song now is getting quite loud as more and more birds have returned, the wagtails returned about a week and a half ago and last Saturday it was the cuckoo. Then on Sunday it was the one I always love to see and that is the swallows, so fingers crossed they want to nest in the alpaca houses again, they have been looking. 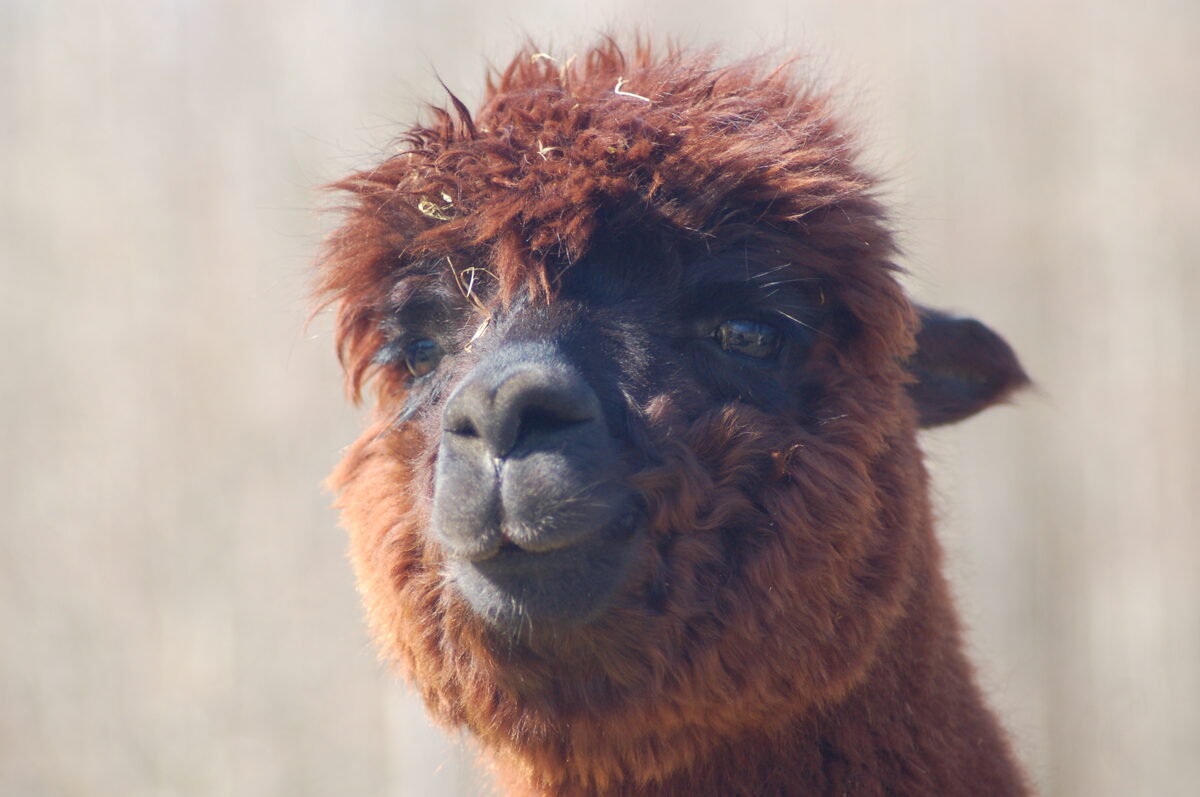 Ilvija is pregnant to George, this is her first cria. I can't wait to see what colour it is. 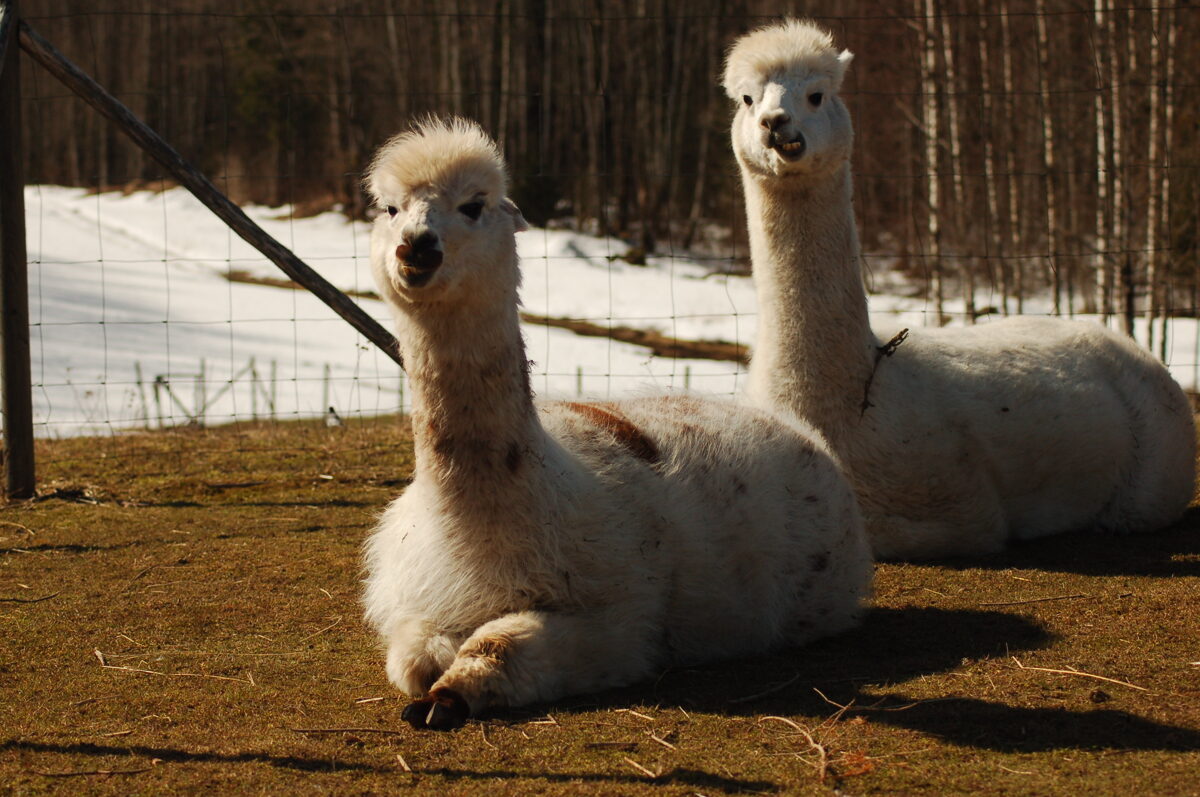 Jakobs and Brencis relaxing in the morning sunshine, that snow in the background has all gone now and the grass is growing fast. 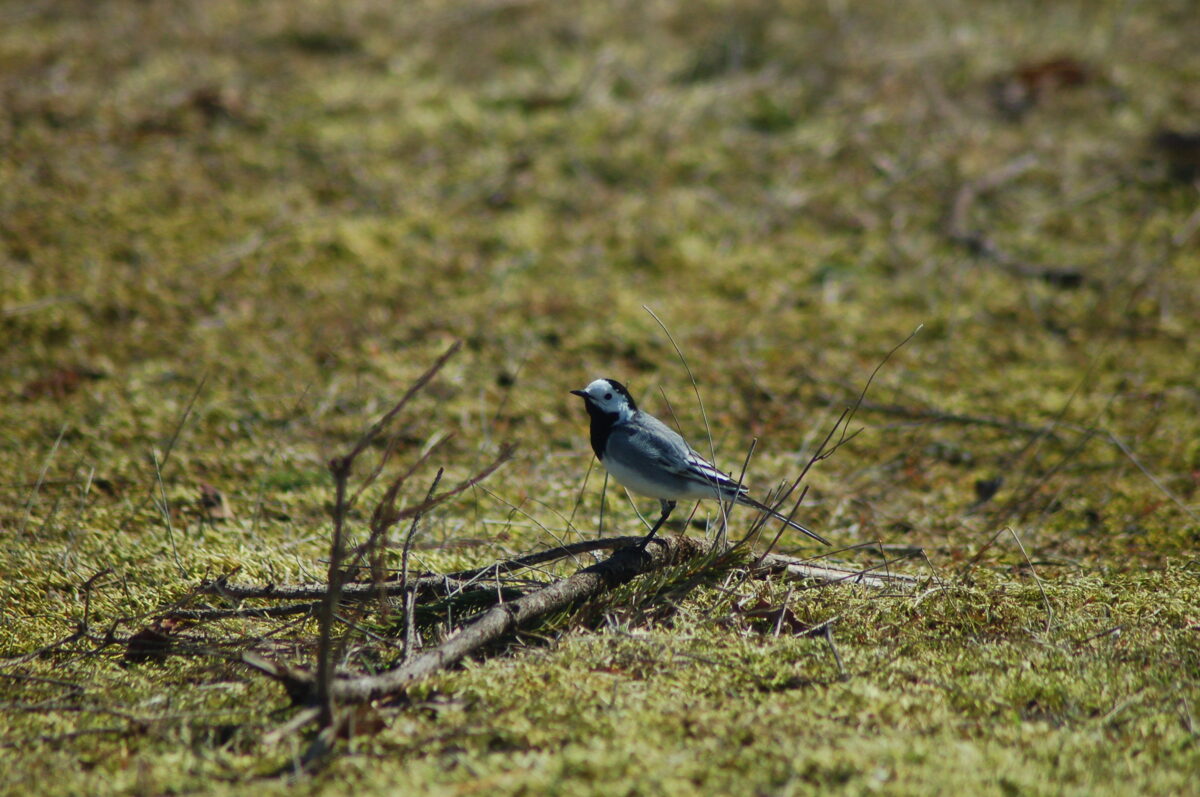 The wagtails have returned. 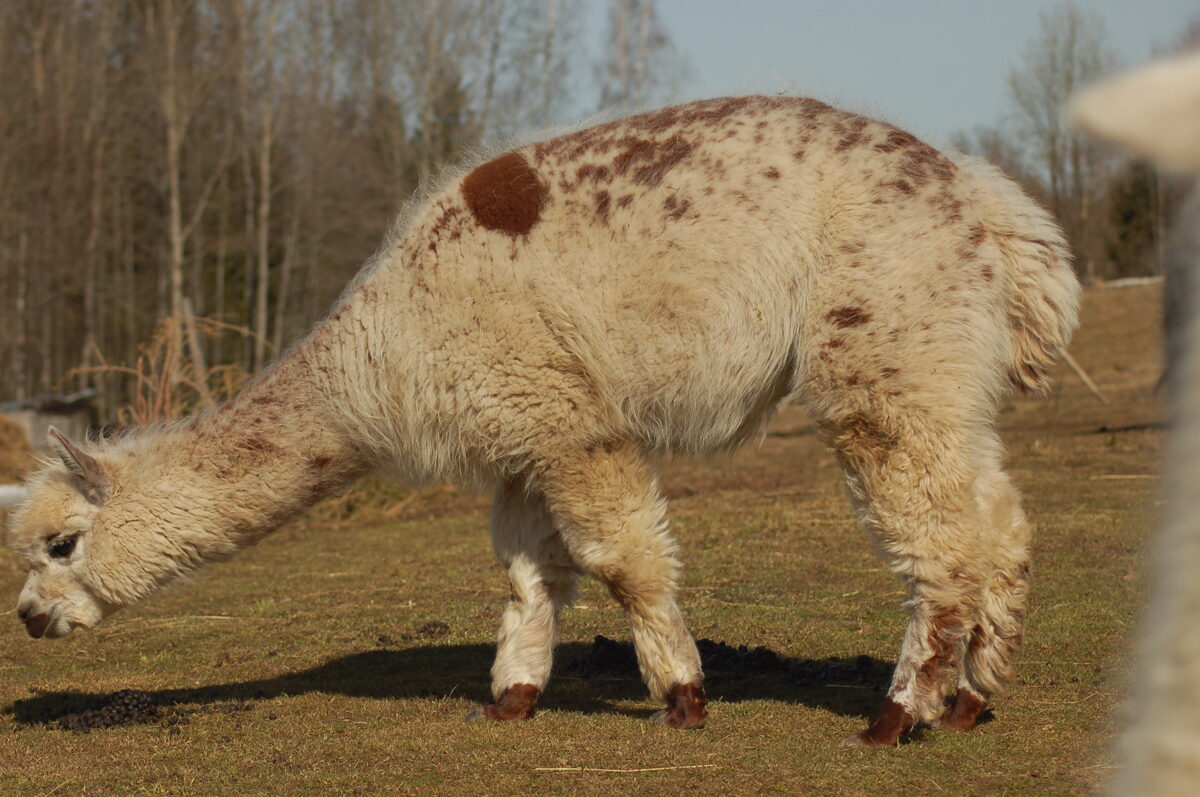 Jakobs is a very pretty looking alpaca, but Silla didn't seem to think so when I took him to mate. 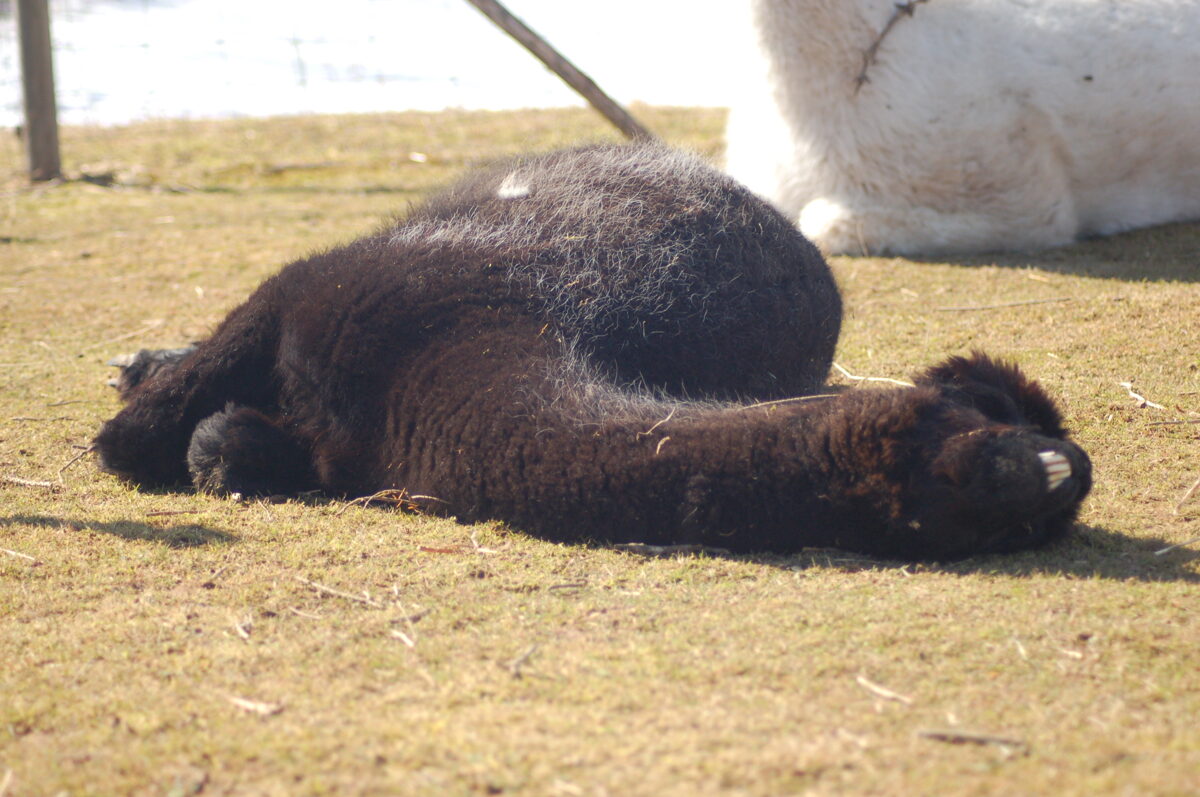 Mr P practicing for those long lazy days of summer. The number of those longer grey fibres is increasing every year. 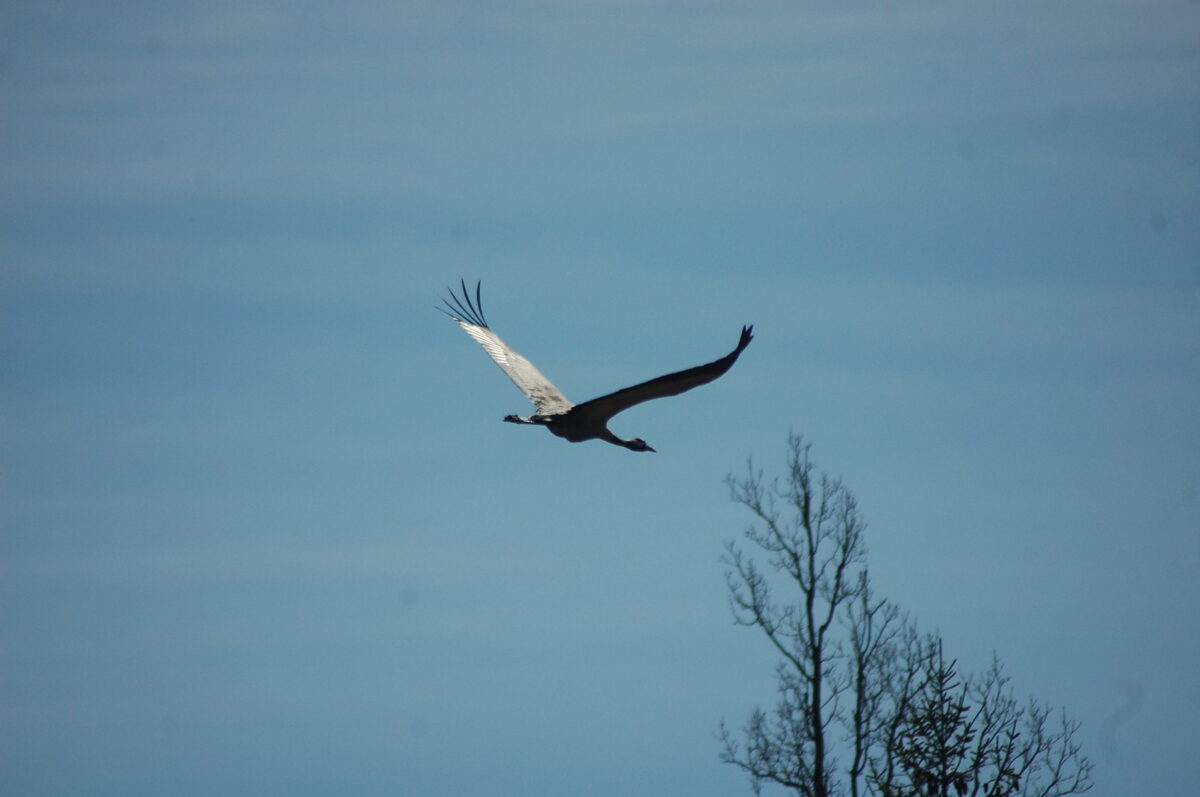 The cranes have been back a while. 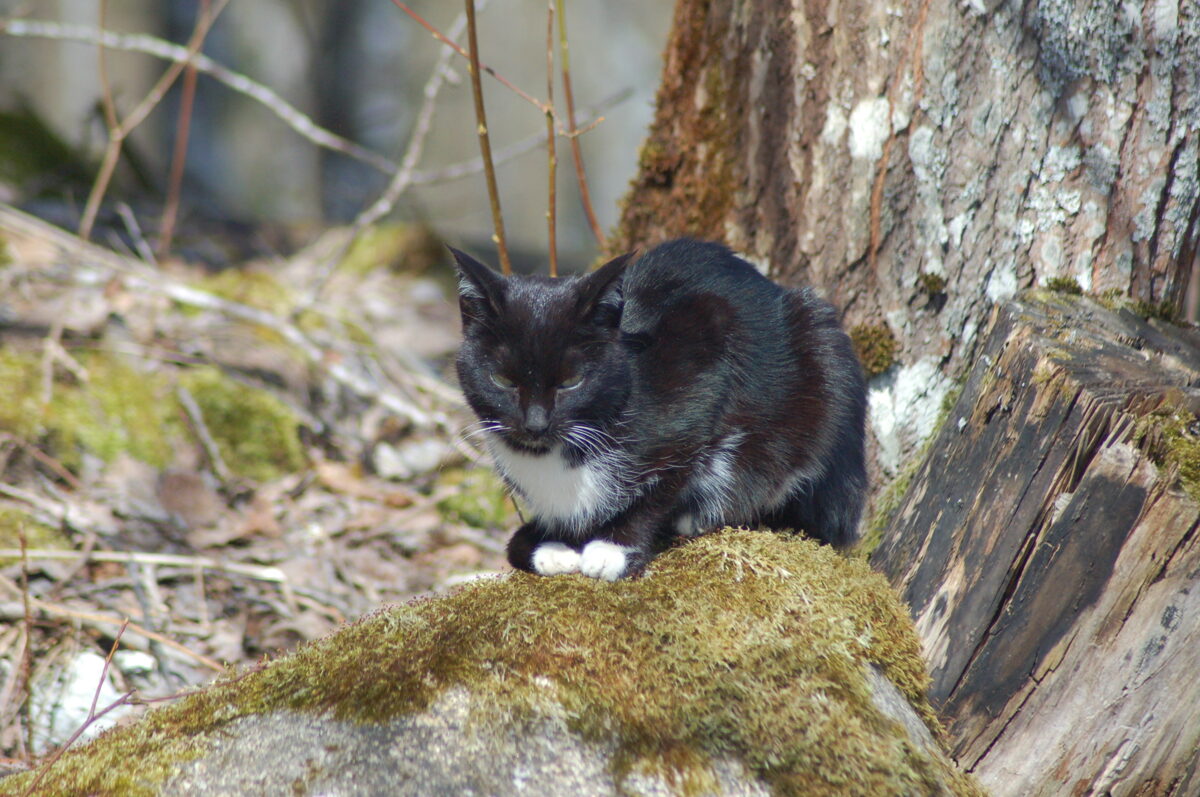 Rocket Ron (aka Mr Rocket) has slowly been putting weight back on. 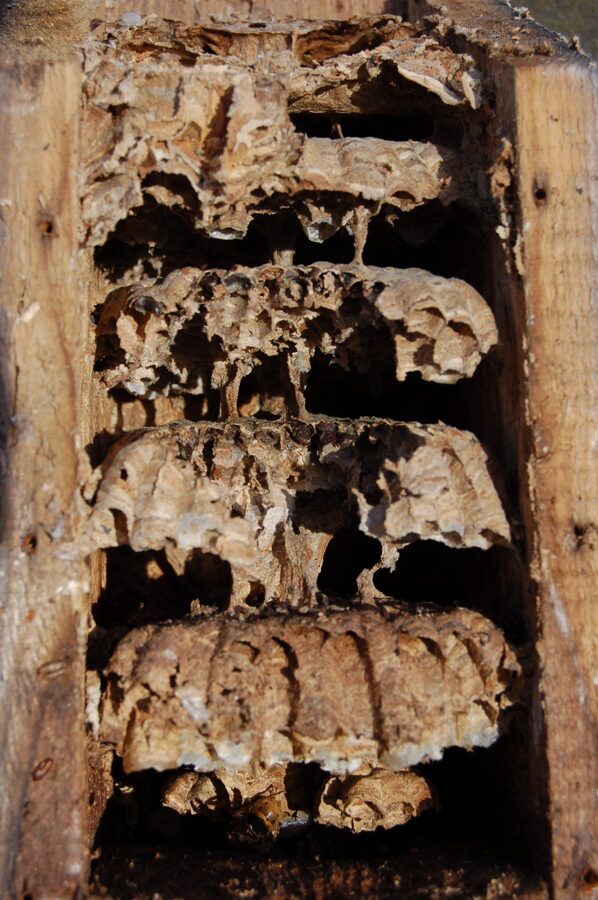 You may remember last year I was stung in the face by a wasp while trying to wash out a wasps nest in a nesting box on the barn. Well I recently took the box down and opened it up, this is the remains of the nest and if you look closely there is even a dead wasp at the bottom. 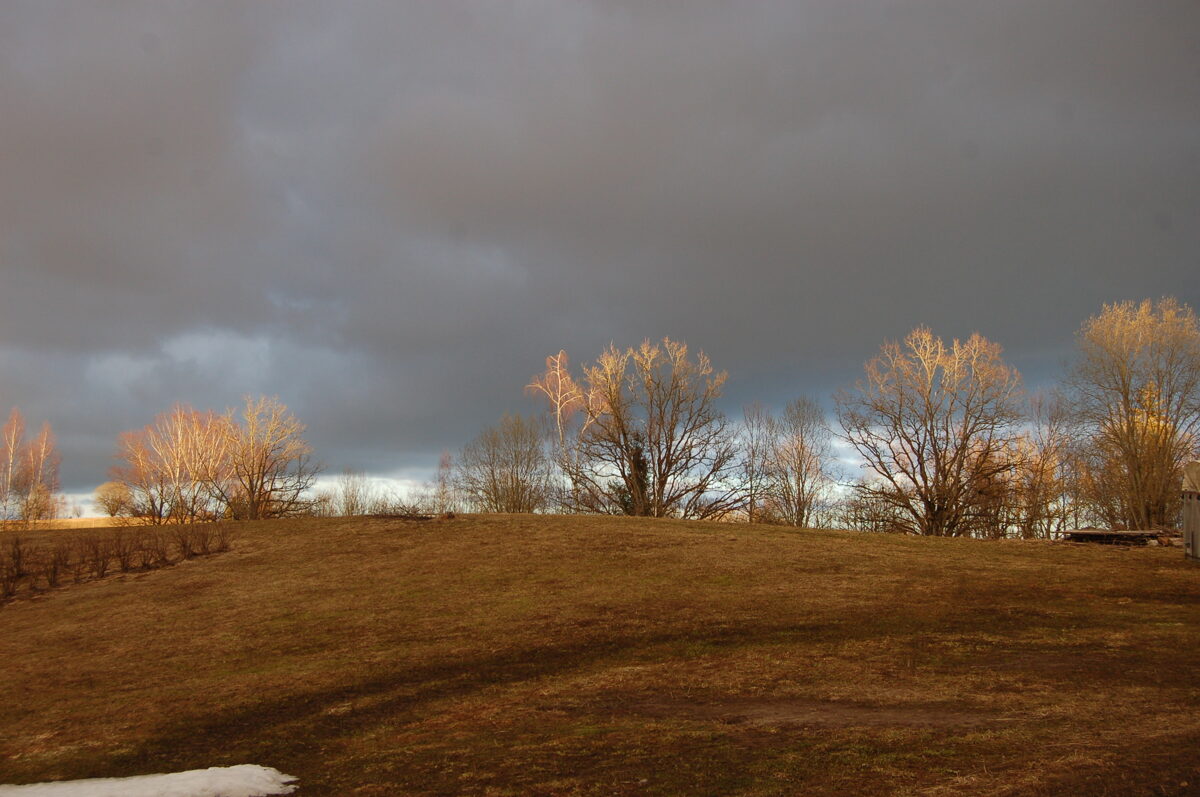 This was one evening as the sun was going down and it lit up just the top of the trees. 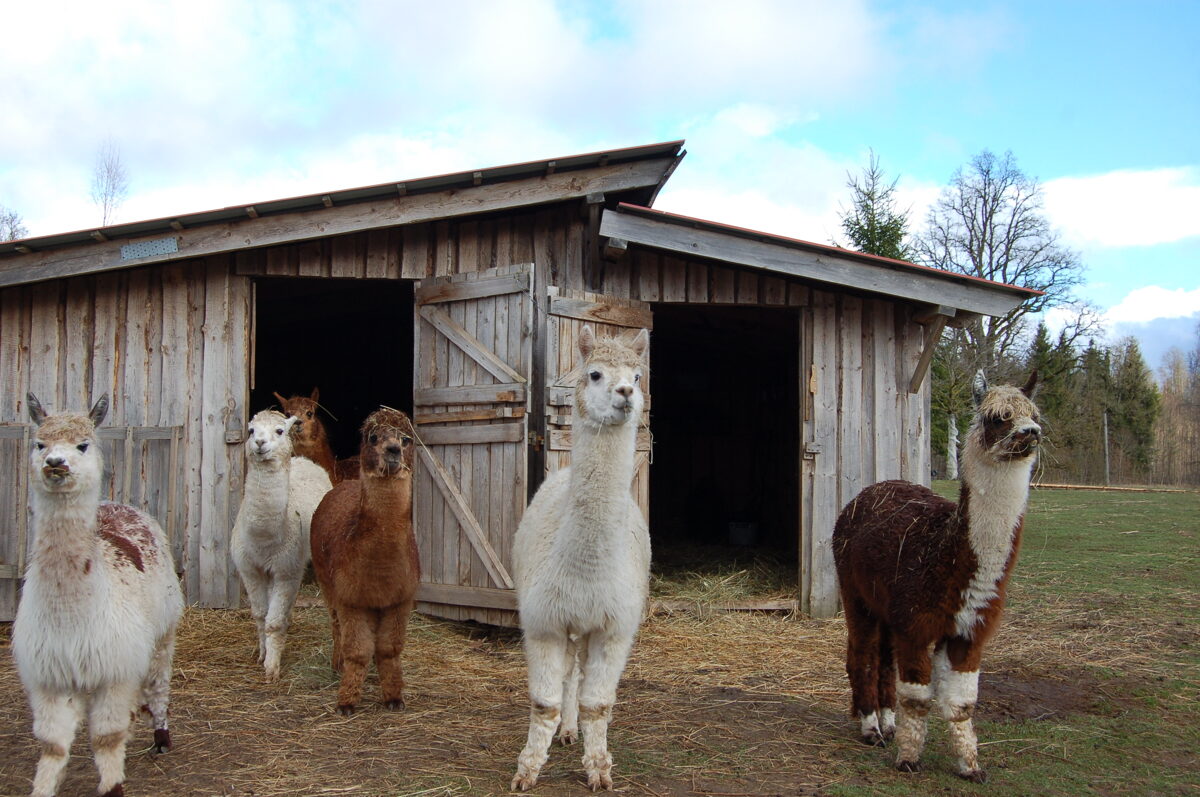 What a scruffy bunch of characters. 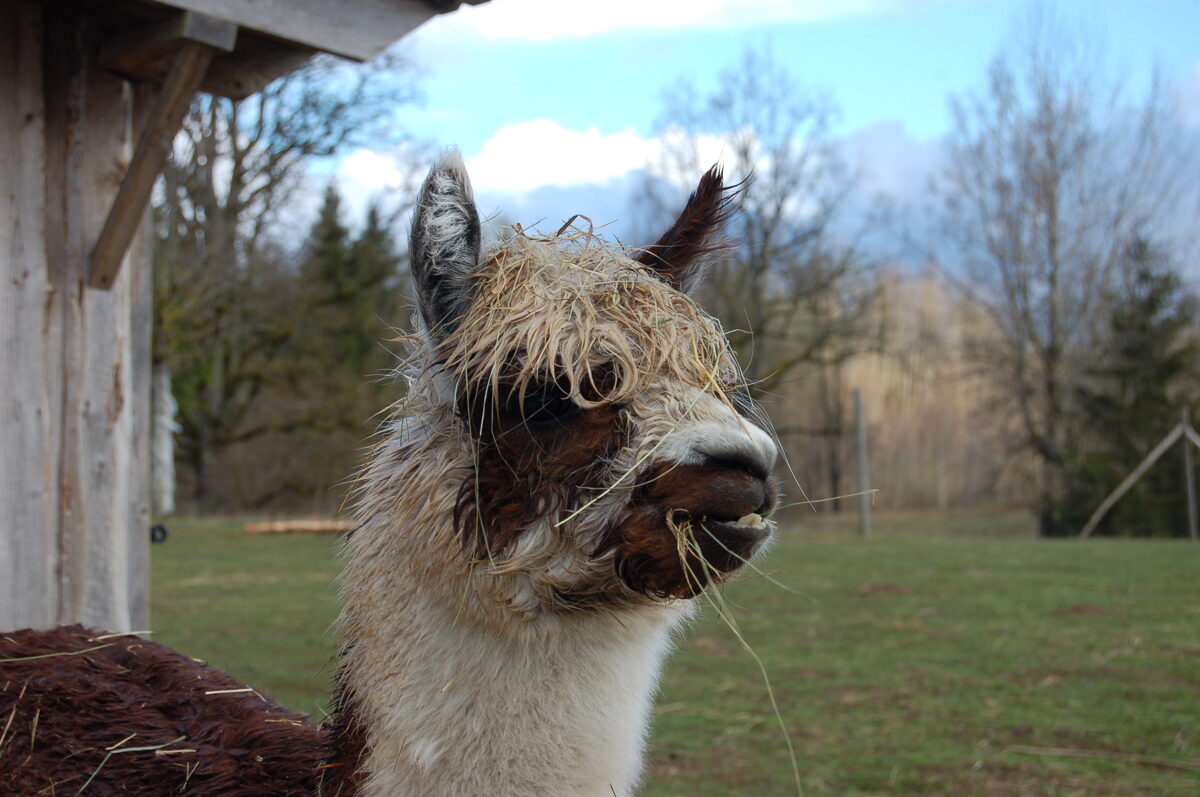 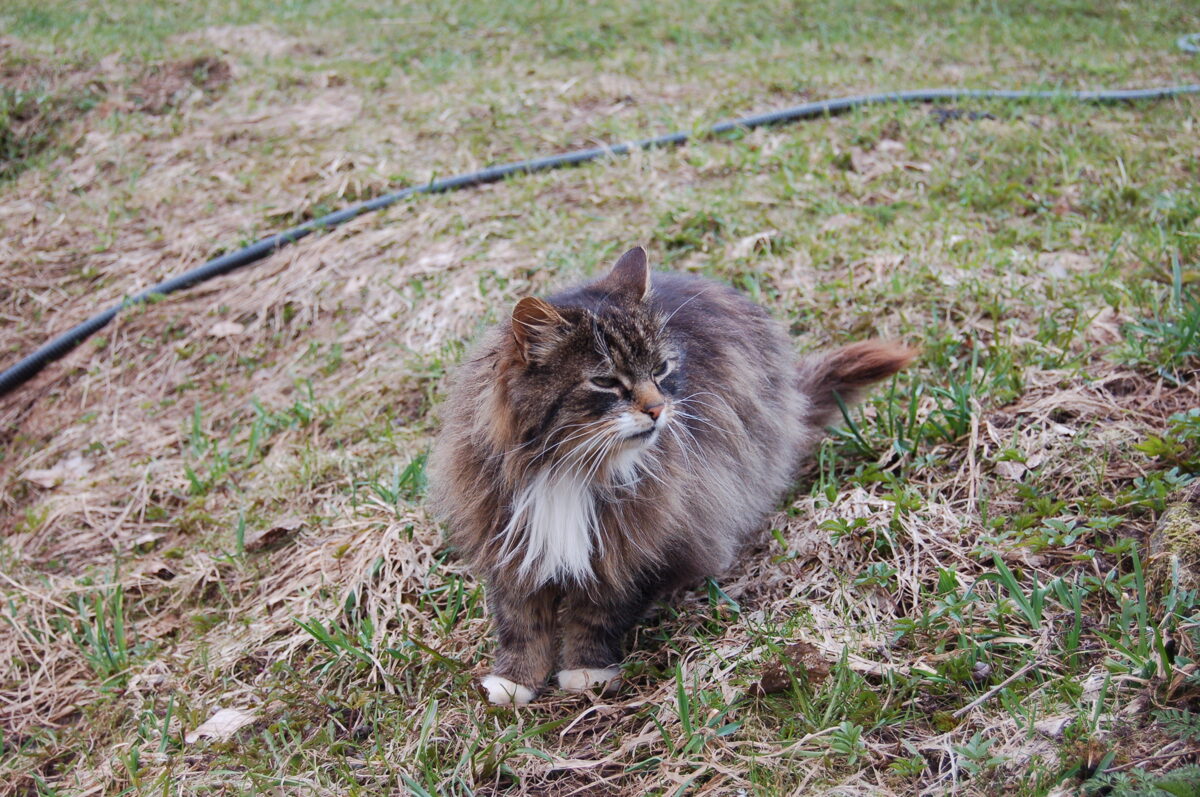 We had our yearly inspection from Sophie our previous cat. She has deserted us for the last few years and taken up residence in our neighbours cow barn where it is warm and she is well fed. 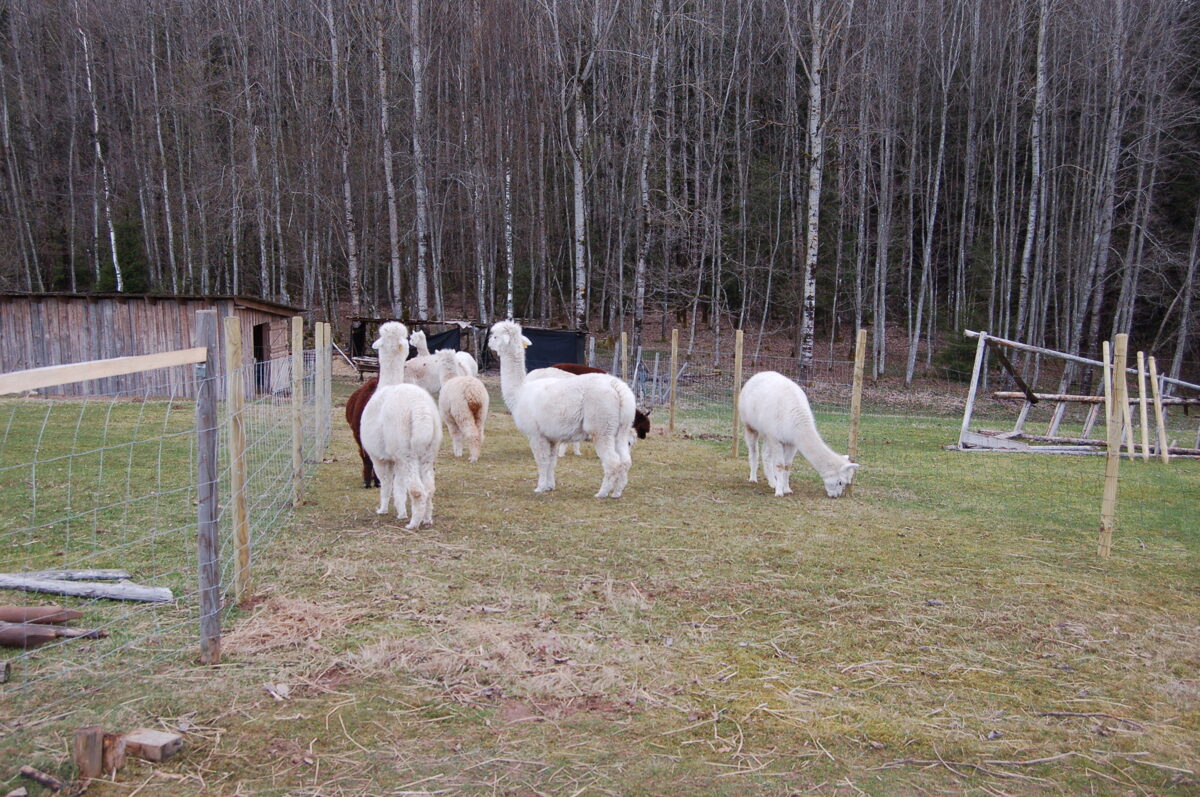 I have fenced off a corridor between the two girls paddocks so the can easily mix. 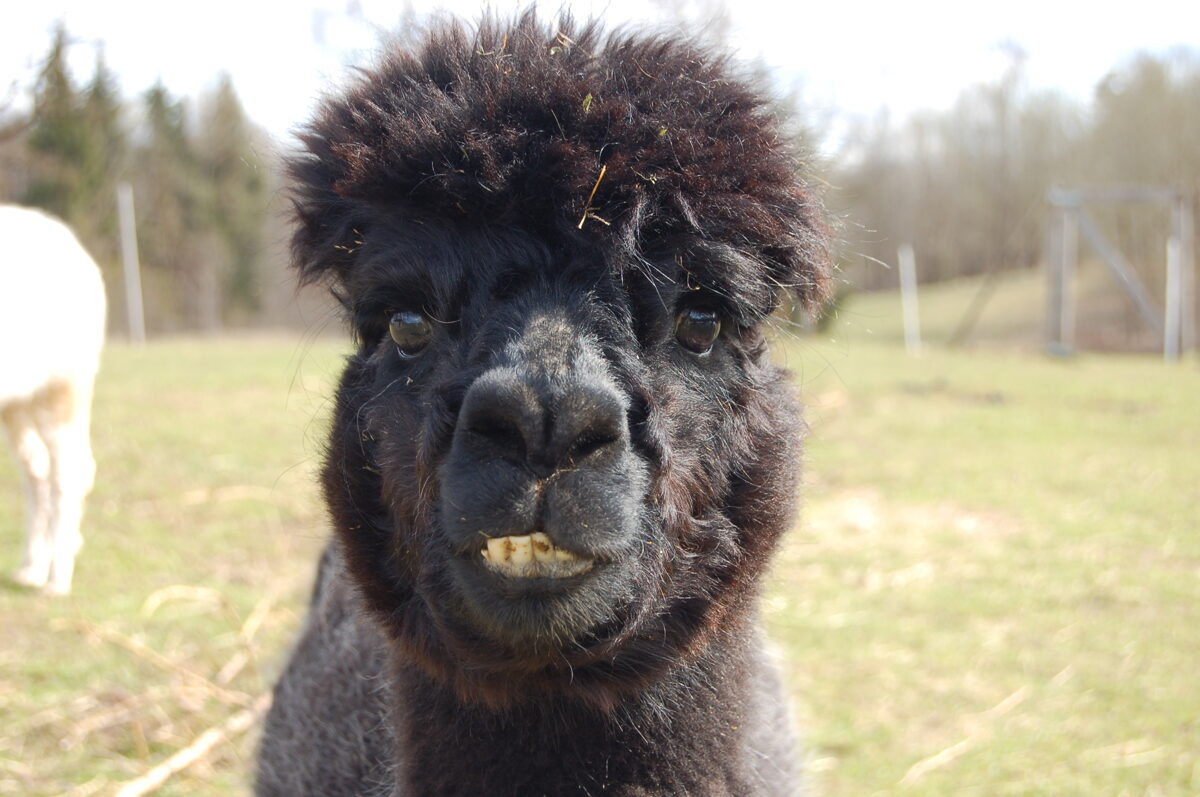 Mr.P is also beginning to put weight back on. I think our hay from last year was not very good as a few alpacas have lost weight. The majority are now on extra high protein food to help them. 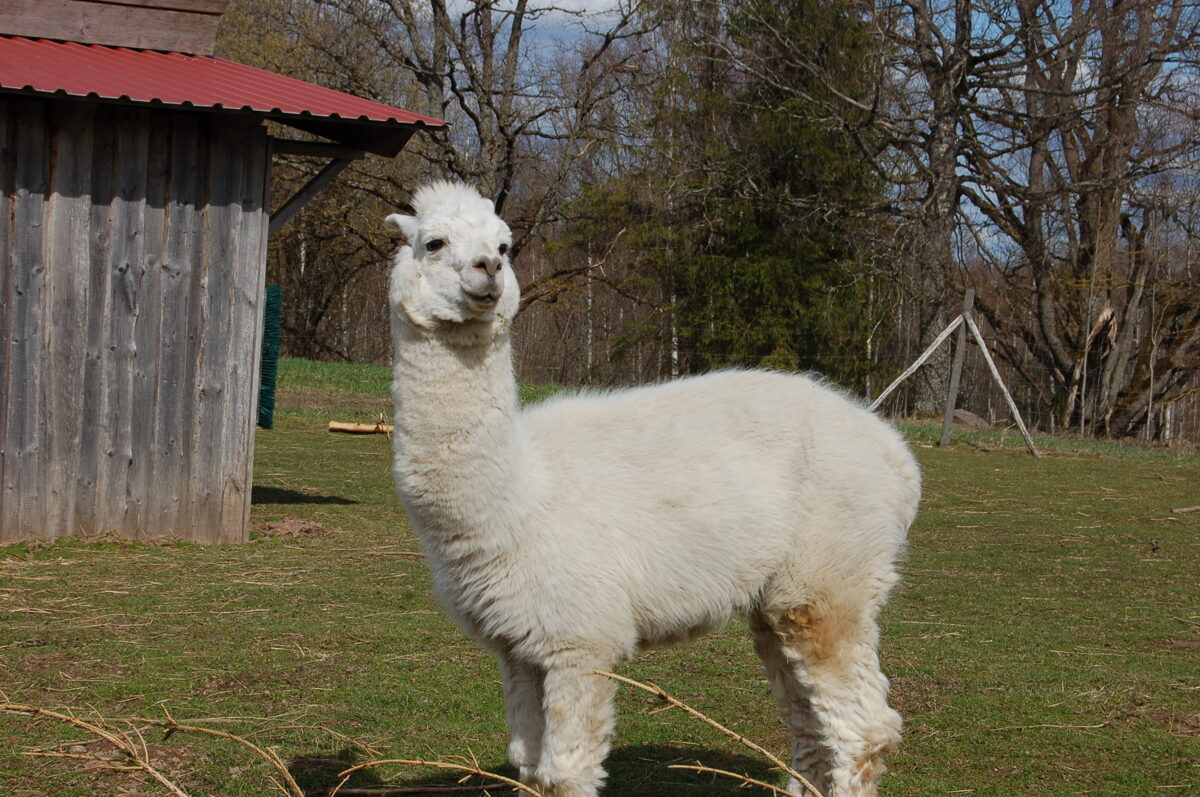 Love this photo of Tellus. Things were so different when Tellus, Herkules and Turbjørn first arrived 10 years ago, we knew very little about keeping alpacas and made plenty of mistakes, but we learned such a lot from them. 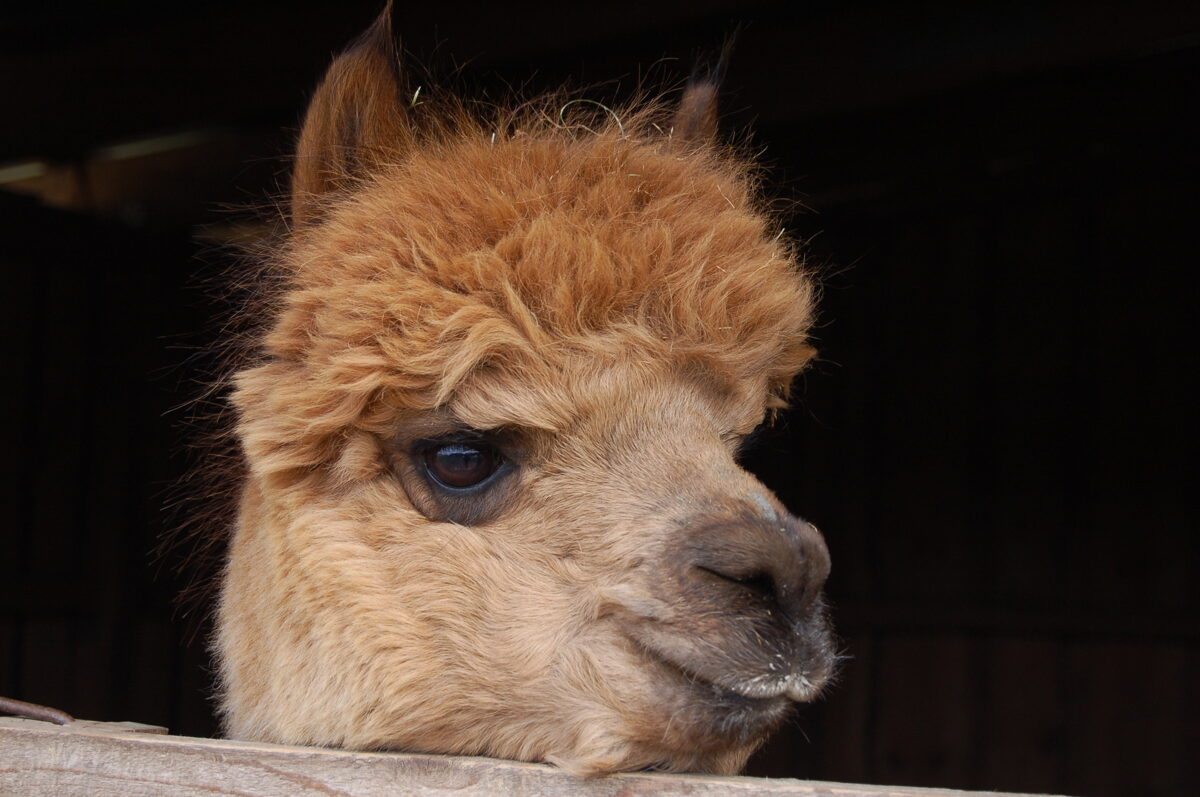 George was on "companion" duty here. He was kept in with Freddie as Freddie was not allowed outside having just been castrated that morning. George wasn't too happy about it though and continually moaned at the door. 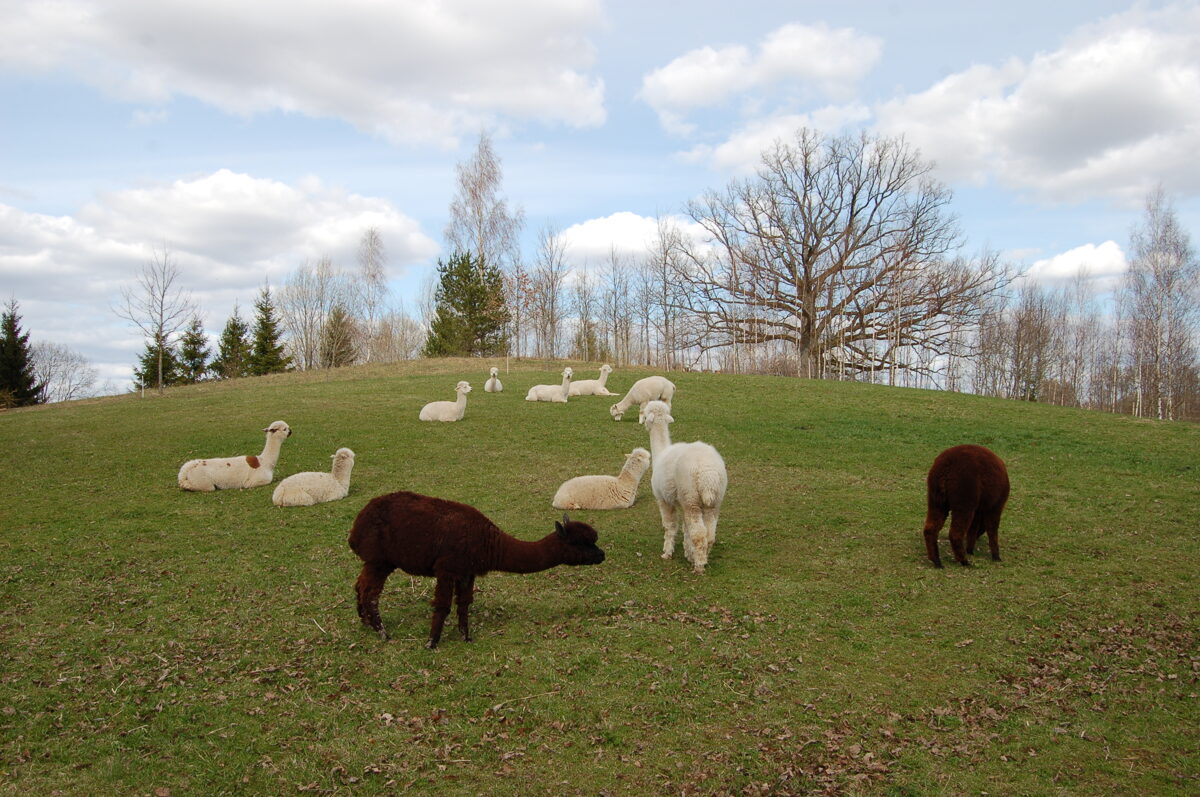 The girls finally out on the grass. 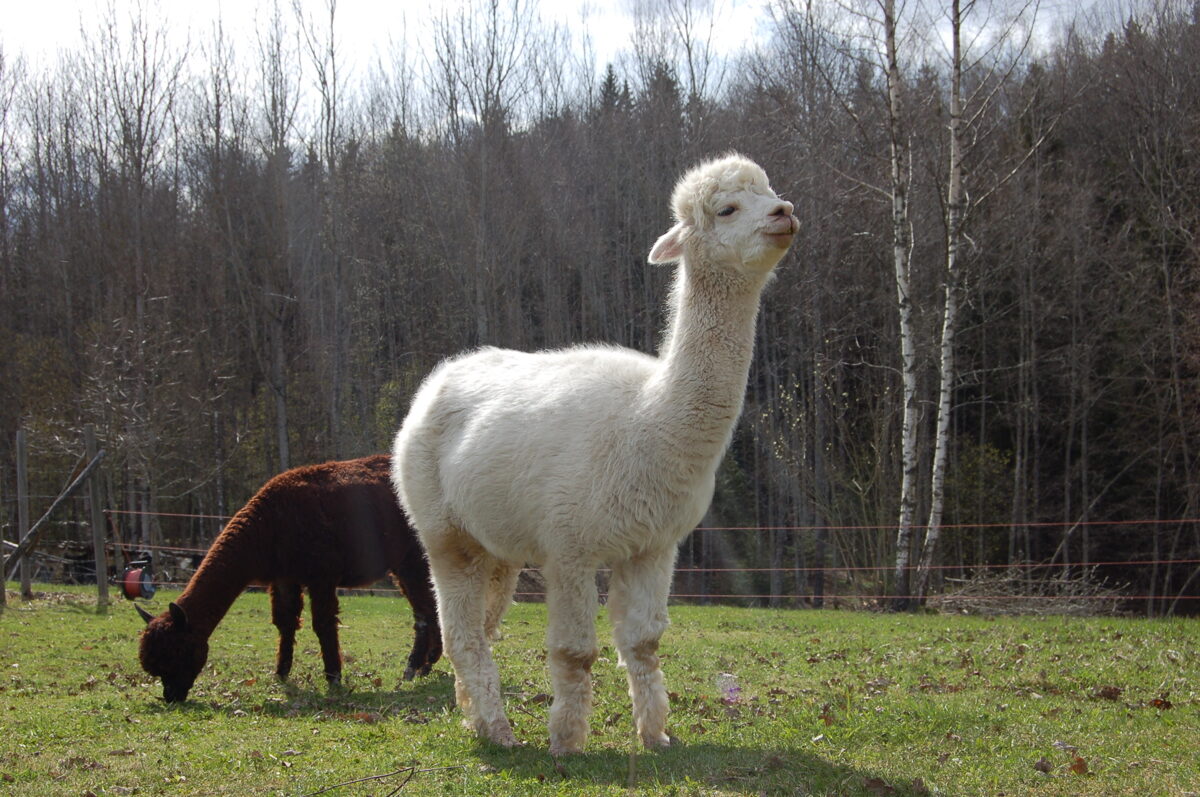 I expected there to be a choir of heavenly angels singing as Aggie is illuminated by the rays from the sun.. 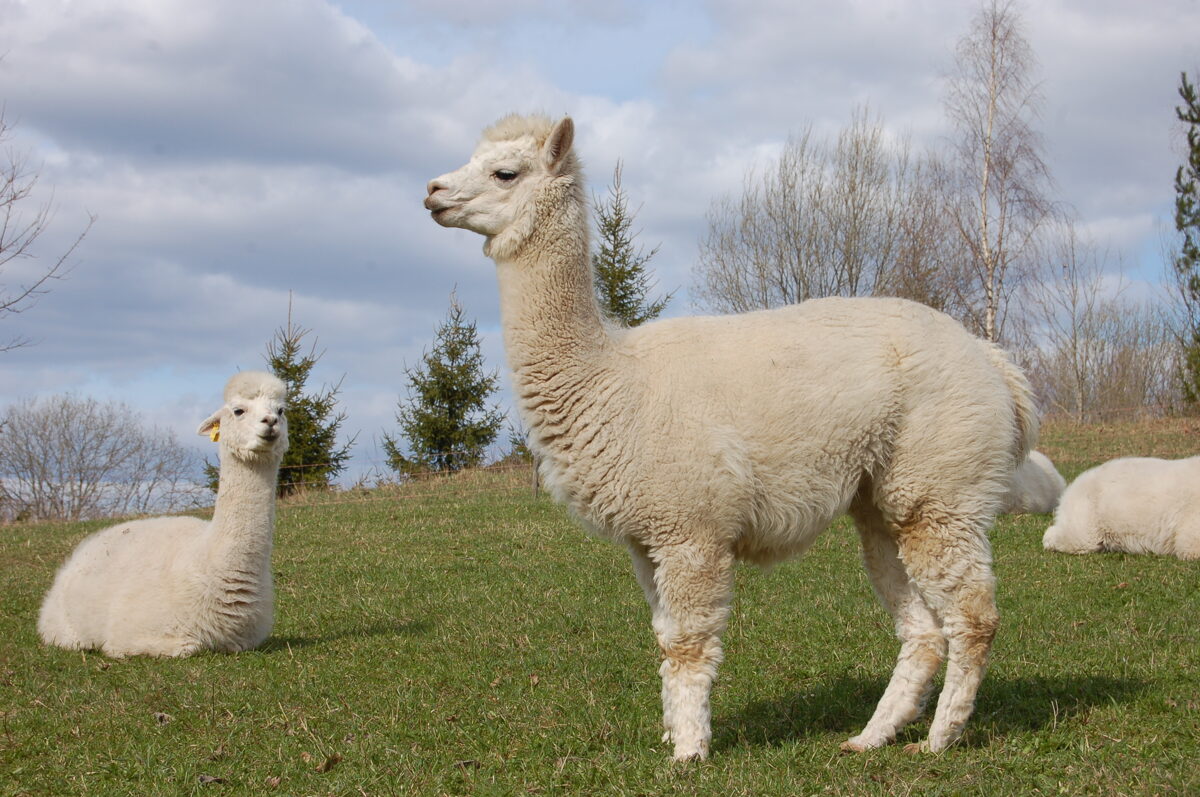 Silla is, as expected, not pregnant, so I am trying to mate her with Jakobs and if that doesn't work then with George. 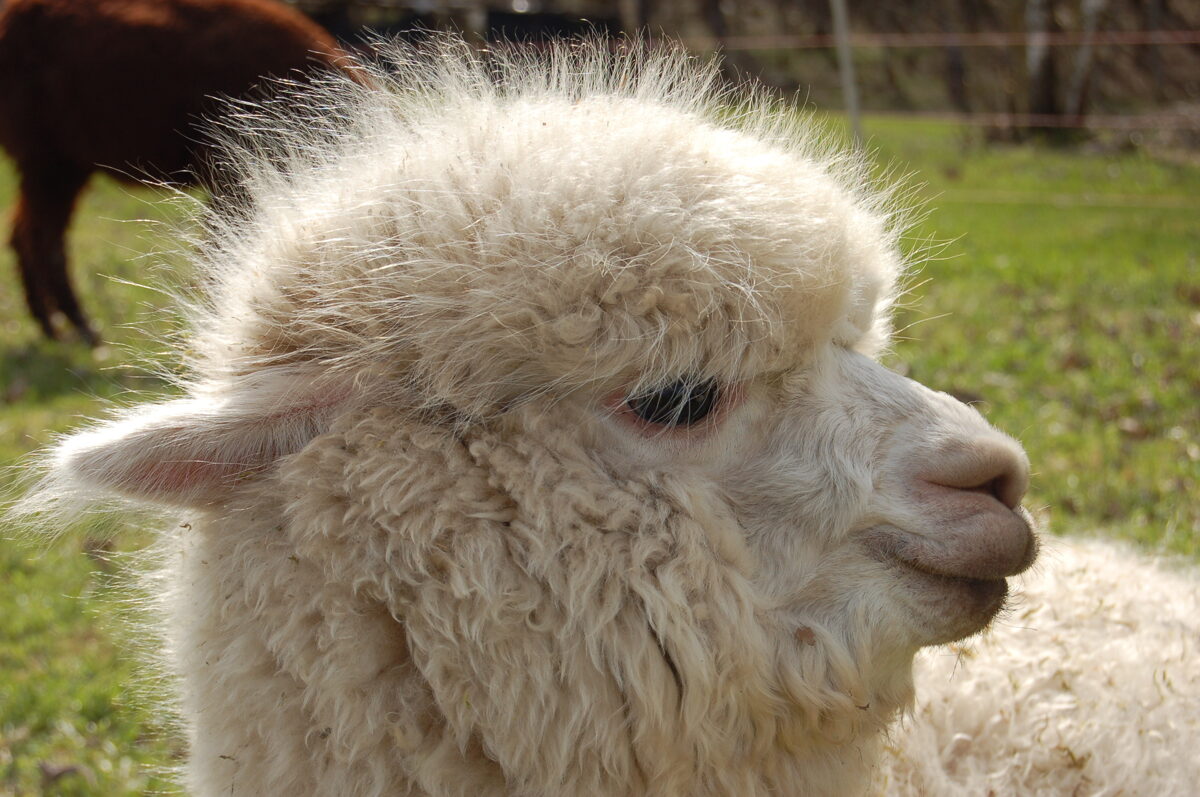 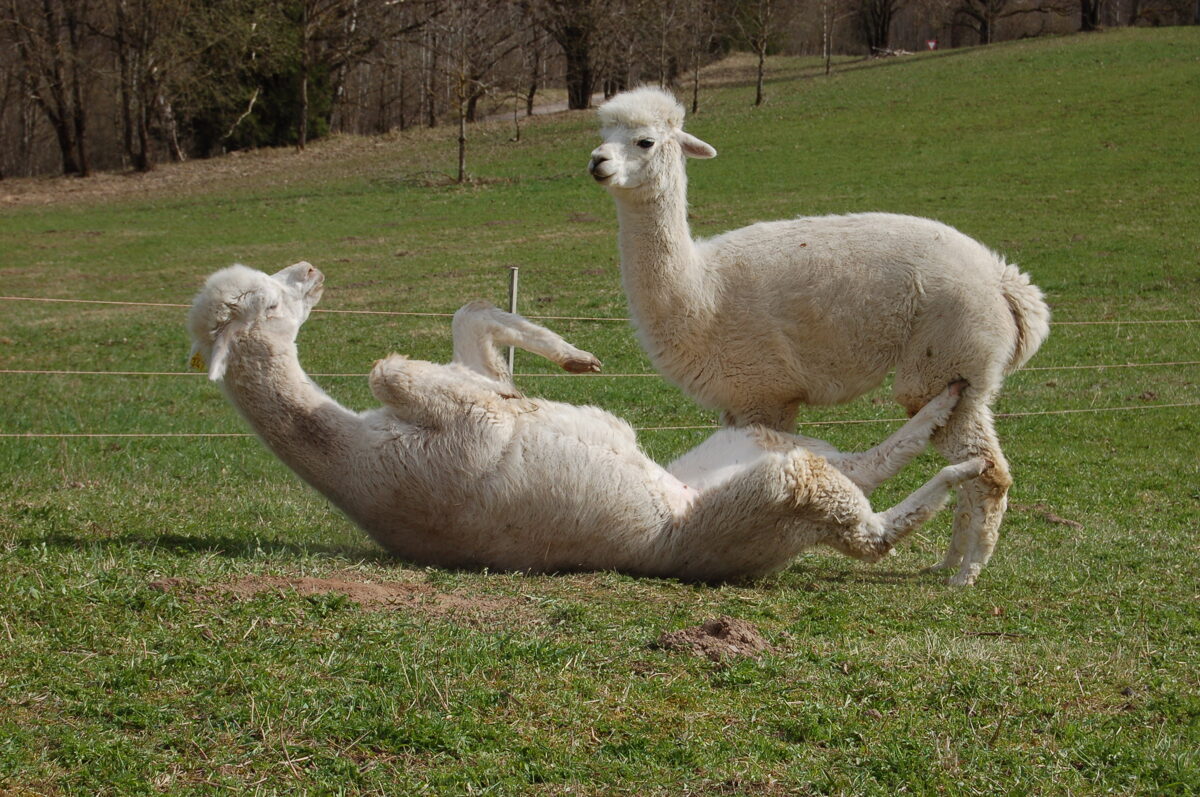 The girls were queuing up to roll in the dust, there were at least five of them one after another. Here Antonia is waiting for Valeria to finish. 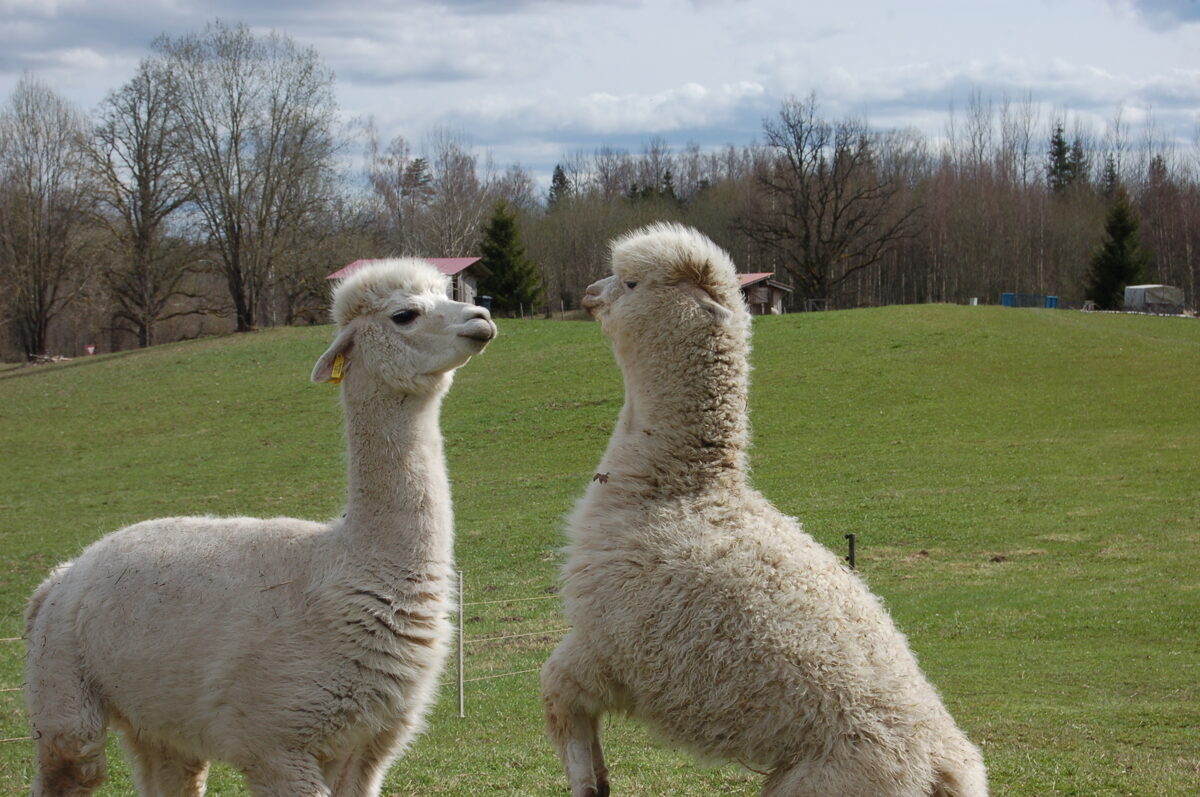 Here little bossy Karla is trying it on with Antonia, needless to say she didn't win. 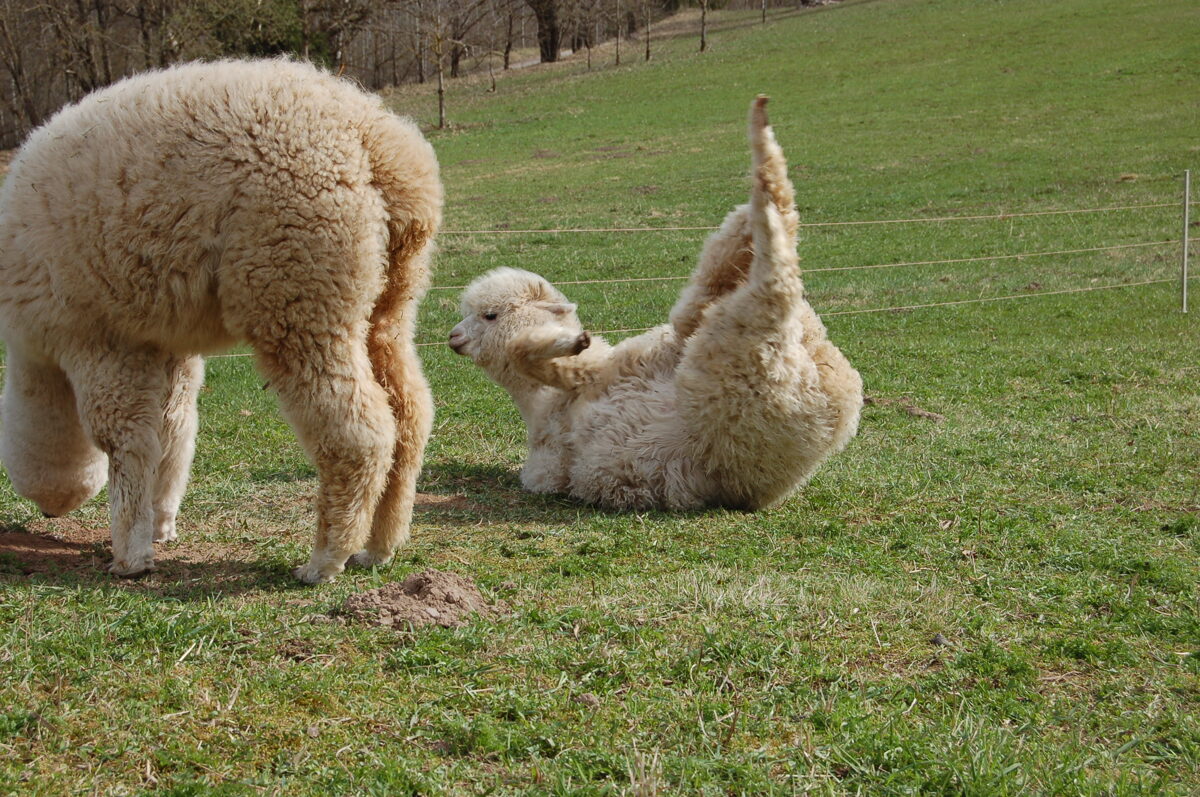 So she decided to go and have a roll in the dust instead. 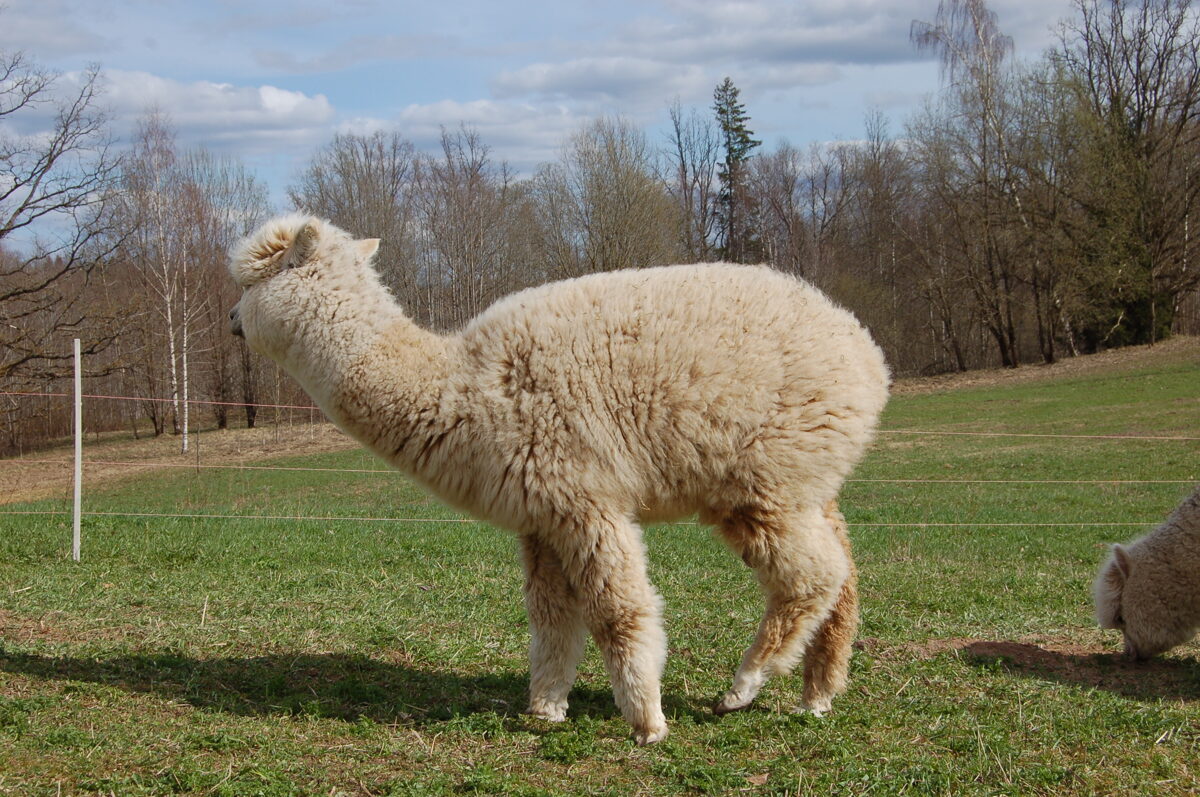 Lolly's fleece also feels so soft, but doesn't pick up as many bits of stuff as Karla's. 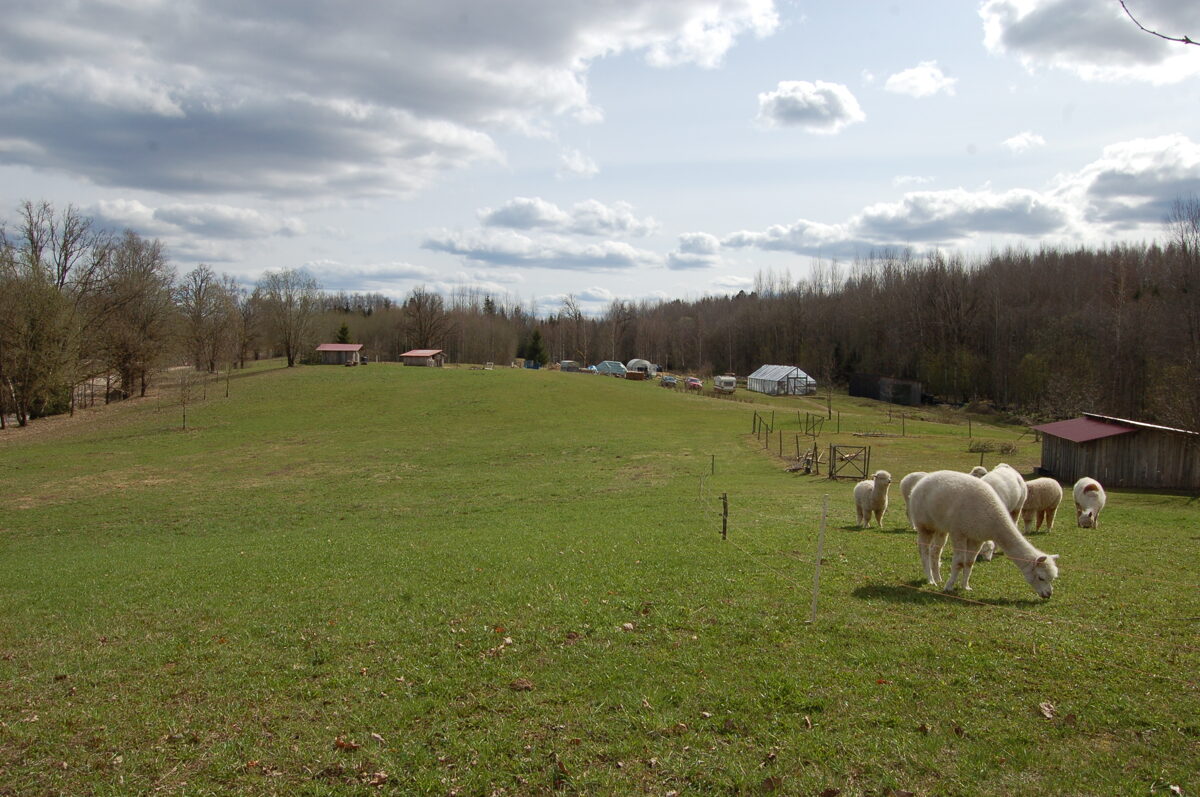 Strange to think just a few weeks ago there was still snow on the ground. 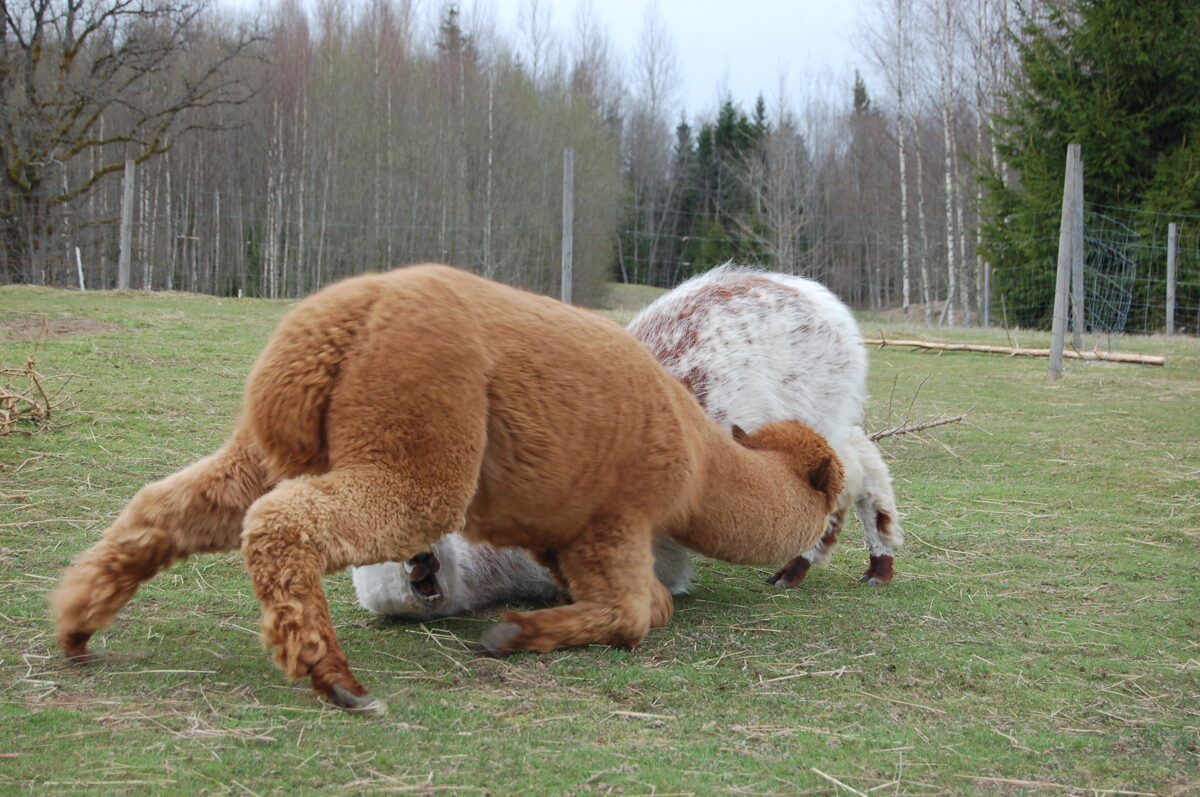 The boys are at it again, especially these two, George and Jakobs. 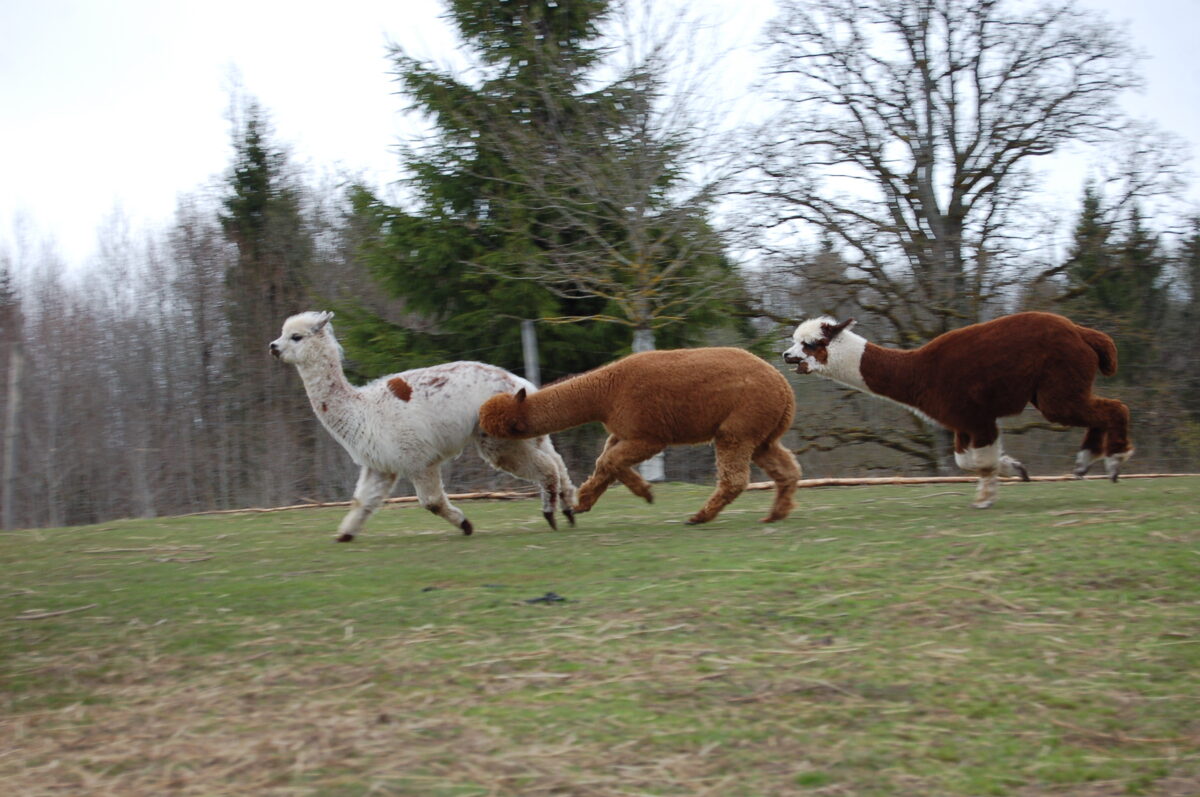