First of August already, where has this year gone? Guess what, it’s raining so it gives me time to do a Facebook post to keep you up to date with what’s been happening.

Firstly, some sad news, it looks like GT the cat has disappeared, he has been gone for over a week now. He was acting a little strange, very nervous and on edge. One night I did hear some cats fighting and the next morning he was gone. So, we are still hoping and praying he will turn up, Sophie used to occasionally disappear for over a week and then turn up as if nothing has happened.

I did manage to get the oak tree hill and half the ski hill cut for hay, around 200 bales which is about half what we need. It looks like I might be able to get other areas cut this week, fingers crossed. I emptied out the 70 or so, three-year-old bales from the barn and put the fresh bales in. We have had people taking the small round bales, we make to use for making decorations for various public events. They are much easier to move around and not so dangerous if they fall.

Alpaca mating is still ongoing with no signs of any spit offs yet. The big plus though is that Vanessa, Valeria, and Antonia are sitting down to be mated and not going berserk and spitting when a male is nearby. Valeria and Antonia did get a prostaglandin injection to basically clear out their womb and reset their reproductive system, which seems to have worked. Mr.P did mate with Antonia yesterday for 45 mins, a new record for us as the longest previous mating was around 15 mins.

As you will know Norman was born on the 23rd July, he did get his hips stuck and thanks to our neighbour who came to help him out he is now ok. After a few days he did start limping on one of his rear legs which seemed to be getting worse. It didn’t stop him from racing around everywhere though. We ended up taking him in the car to see the vet just in case there had been some trauma to his hip when he got stuck. The problem seemed to be more in his knee joint than hip, he has had a course of pain killing injections and he seems to be improving. The vet also had to come to see Marvin, poor guy was straining to poo and not producing anything. So, she gave him an enema and some paraffin oil, and he was ok after that for about five days then stopped pooing again. We gave him another dose of paraffin oil and since then he has been pooing. I think the threat of another enema was enough to get him going.

The last week has been taken up with building the new summer house, a friend said it’s like a giant adult lego set. The various bits are all labelled except some of the labels had faded just to make it a bit more interesting. It is now at the stage of putting on the roof on, but rain has stopped play for the next few days.

Lelde our intern has been fantastic; she has translated for me when we have had visitors and even shown some groups around on her own and is fast becoming an alpaca expert. She has helped with the hay making and building the summer house and many other jobs. Not sure if that is what she had in mind when she initially signed up, but I think she is enjoying it. One thing she has greatly helped with is the planning for our upcoming Felting Workshop on Saturday 13th August, here is a link to the details in English https://www.facebook.com/photo/?fbid=417325020430493&set=pb.100064589955813.-2207520000..

If you are interested in attending, please contact us to book your place as places are limited. 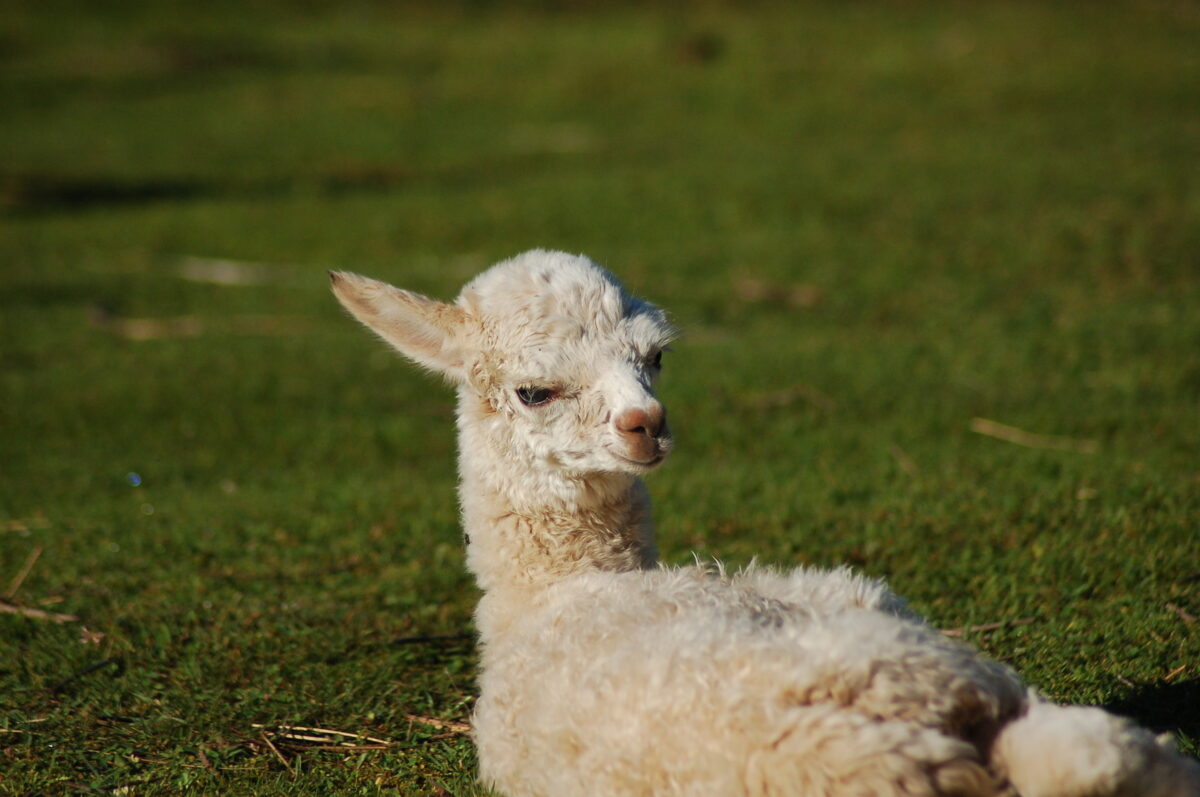 Marvin relaxing in the morning sun. 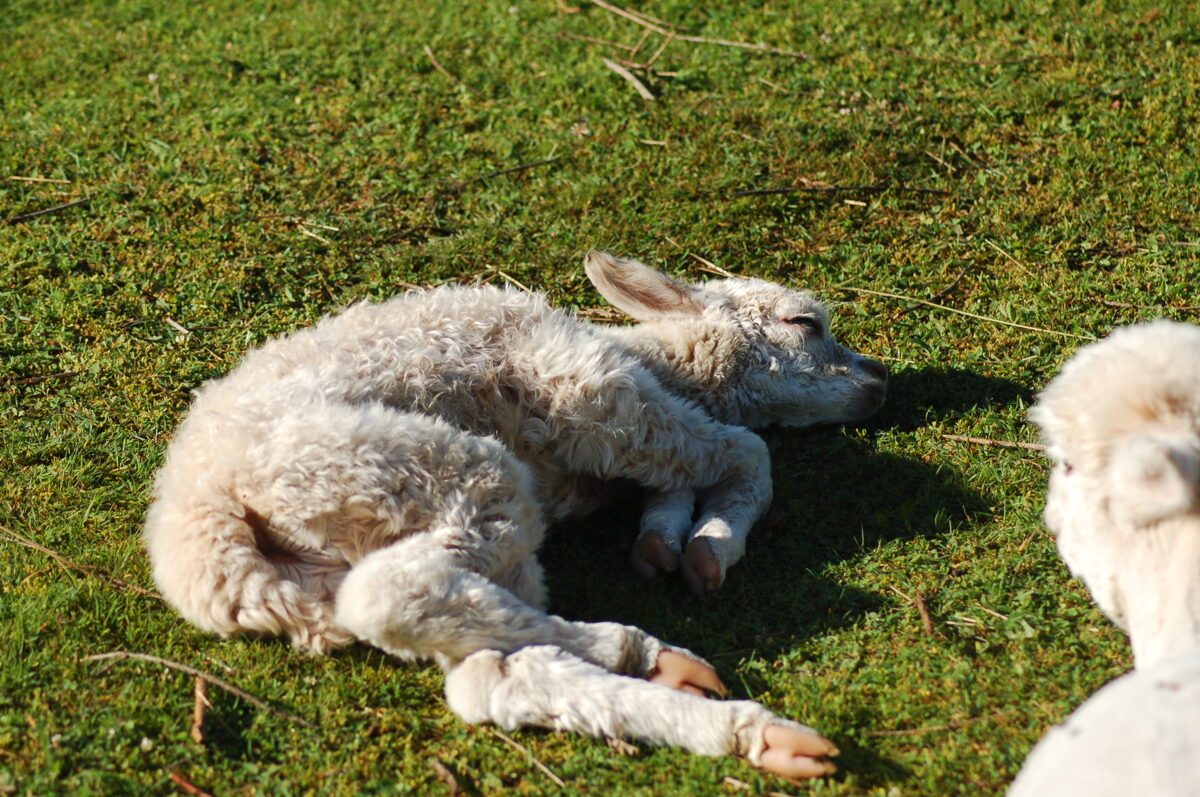 There is relaxing and then there is falling asleep. 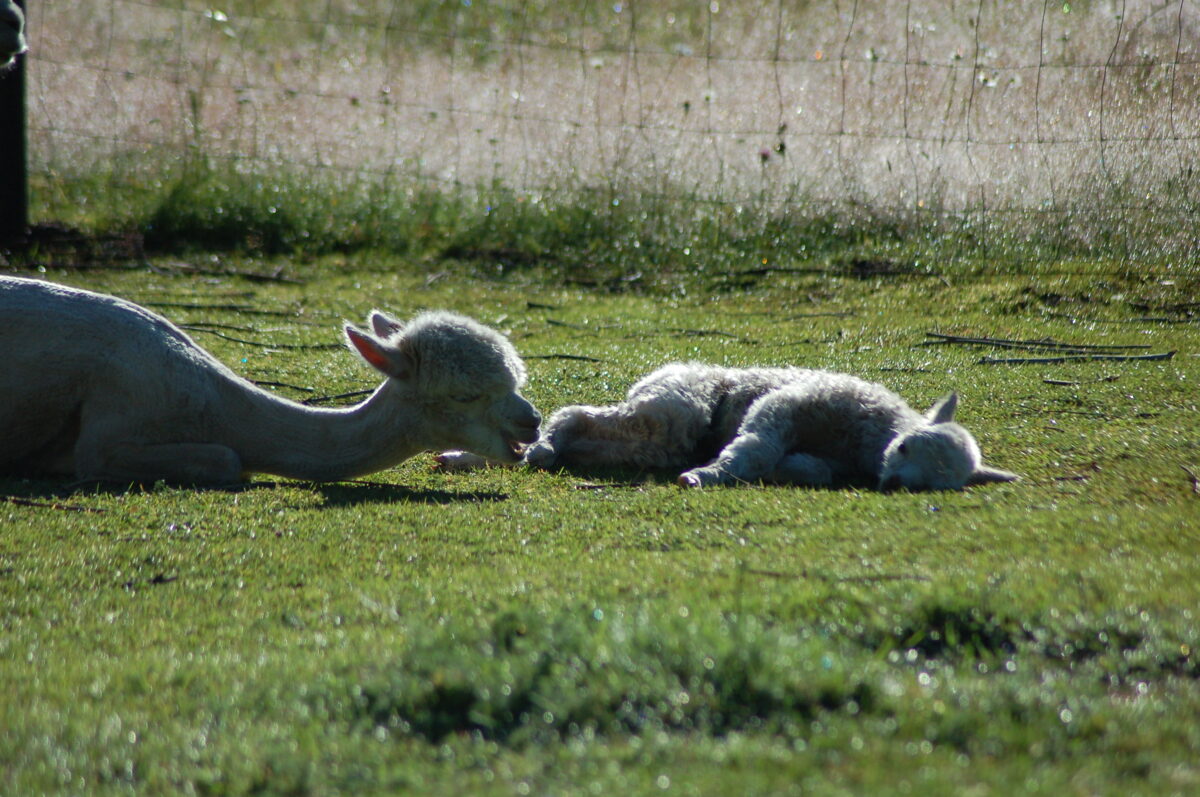 Marvin and his older sister Karla, the two of them are not exactly best of pals. 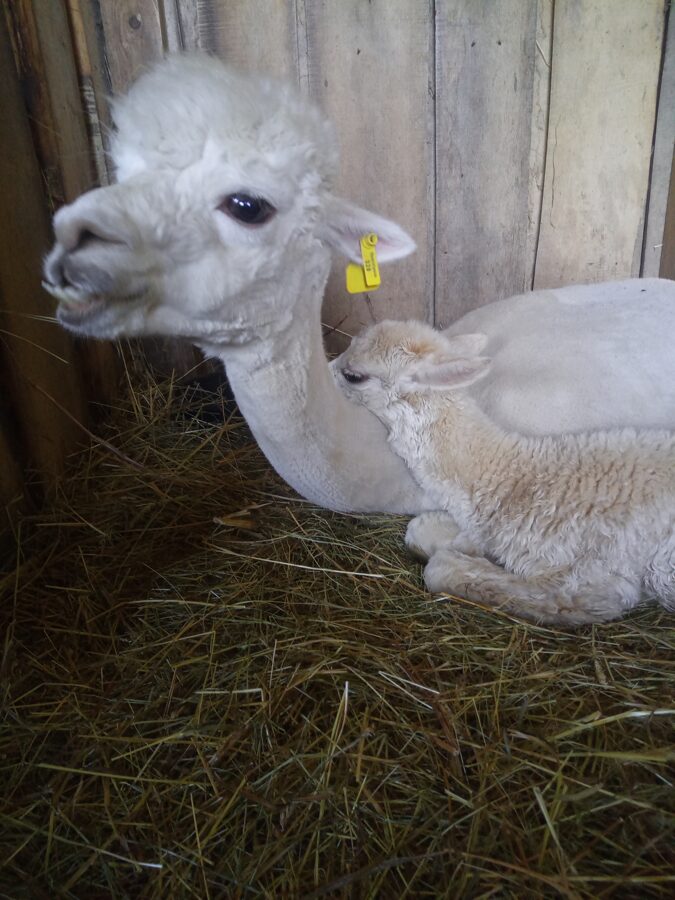 Marvin resting on his mum Amanda. 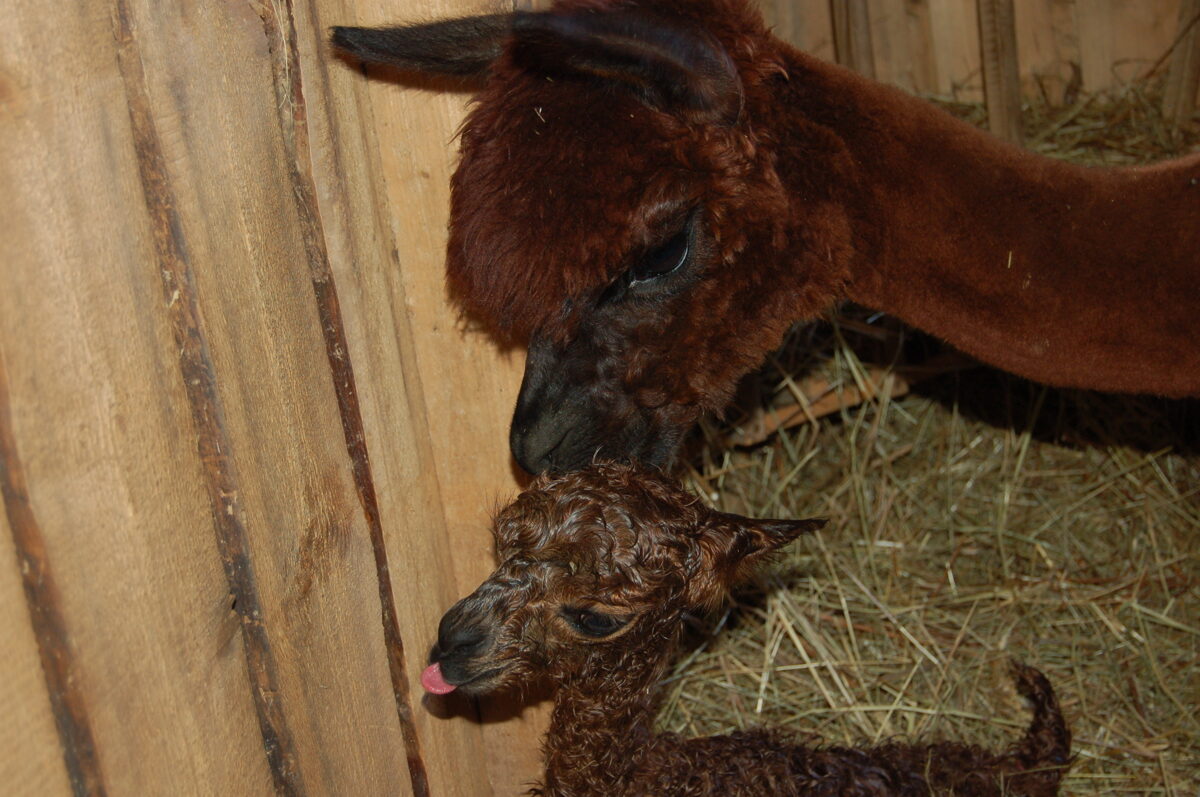 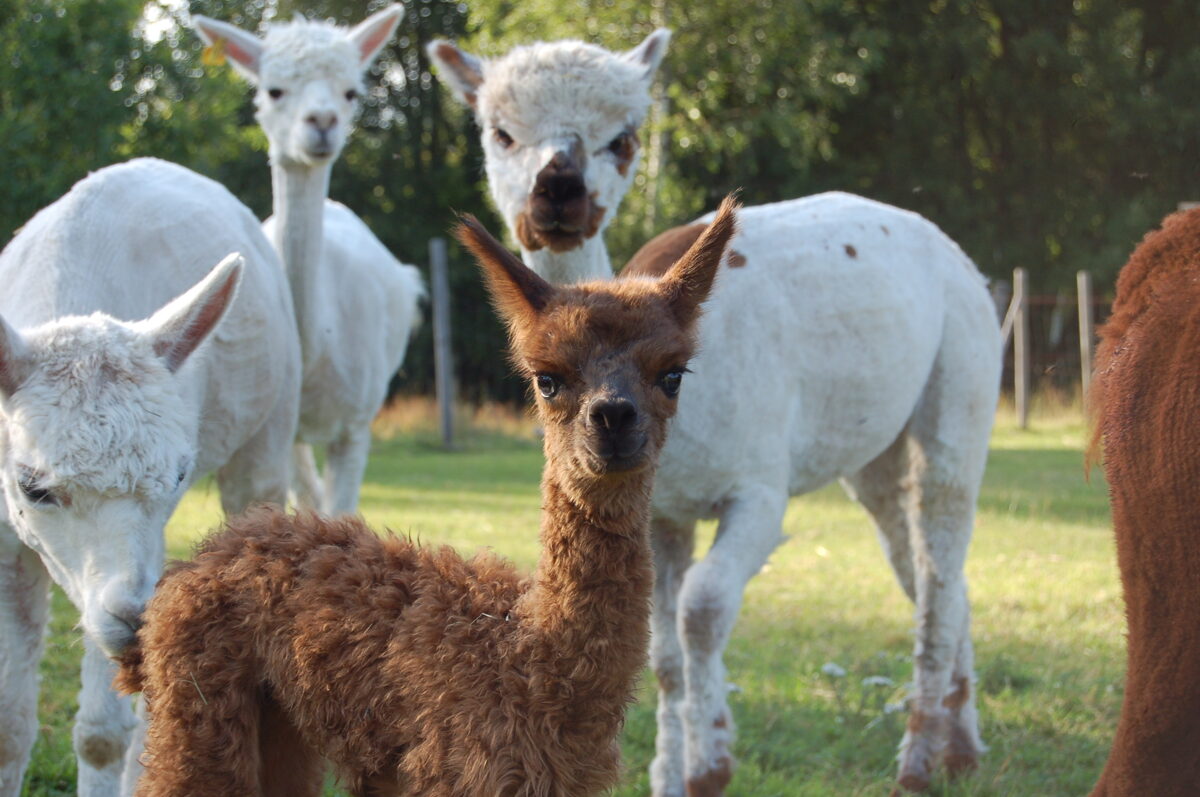 Norm was centre of attention when we finally let him out. 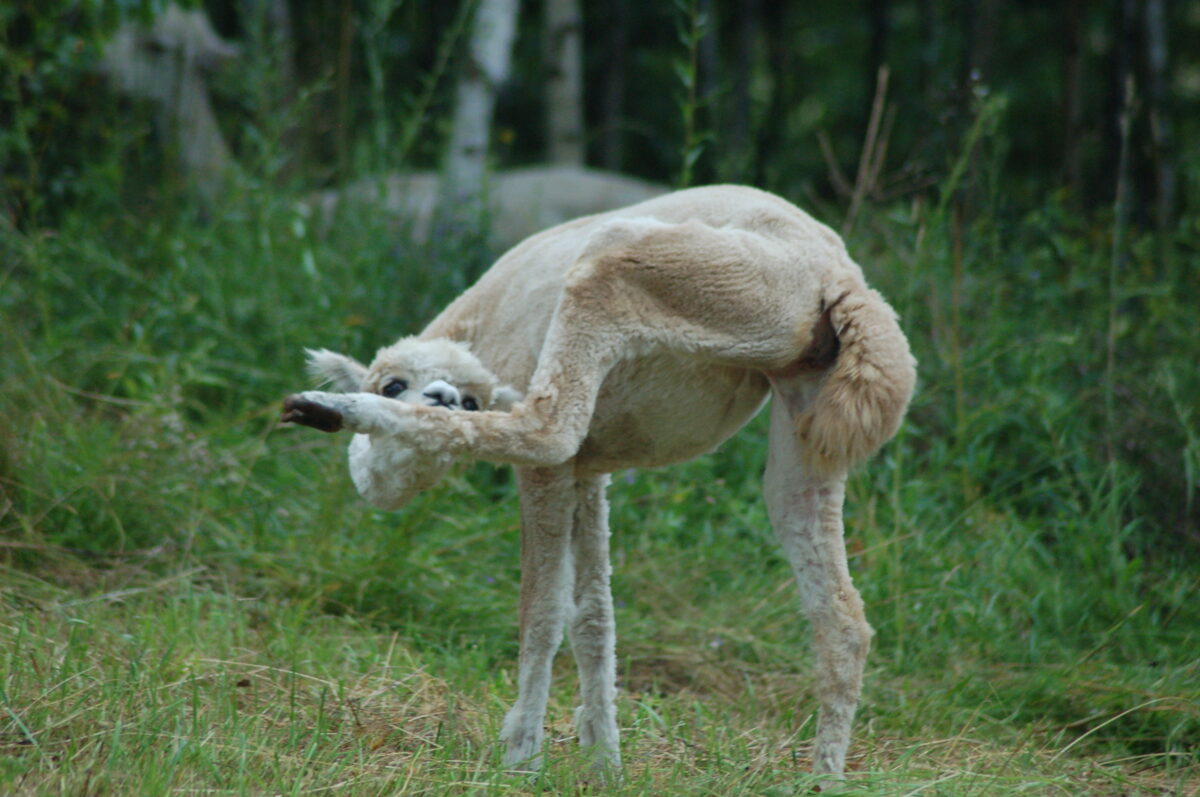 Lolly is becoming a master at alpaca yoga. 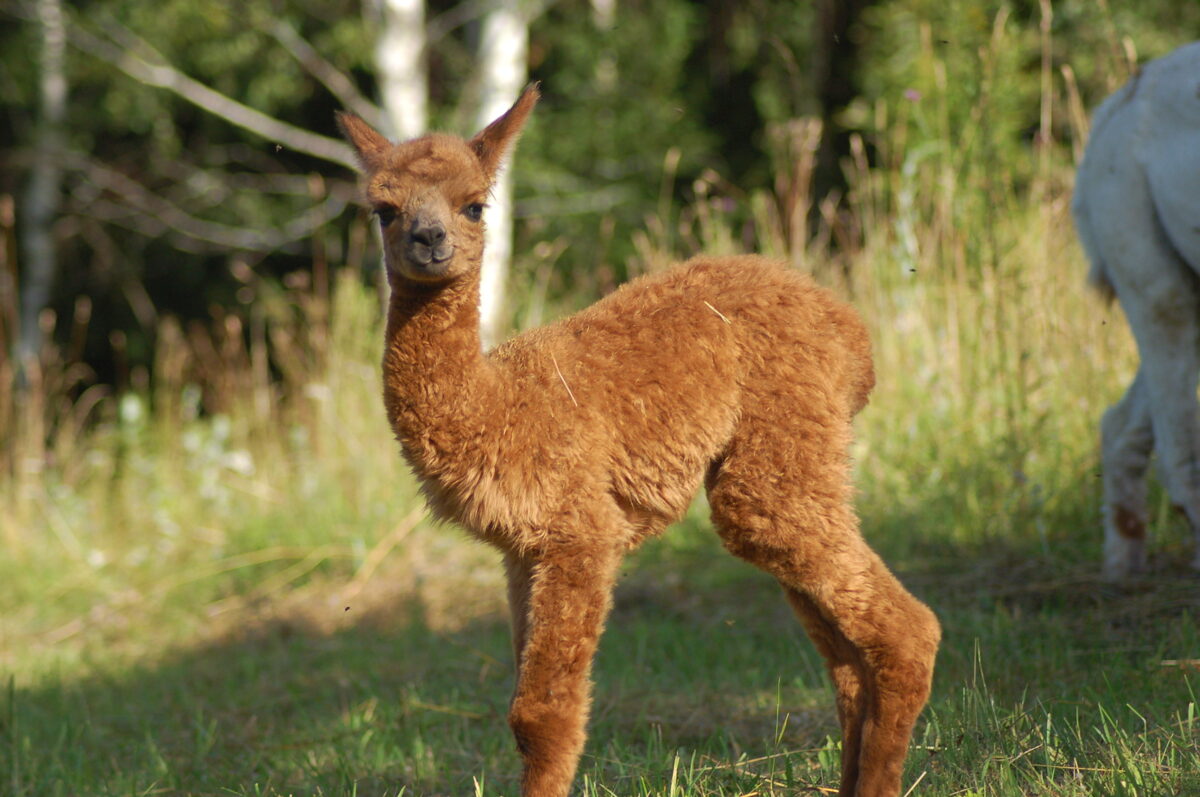 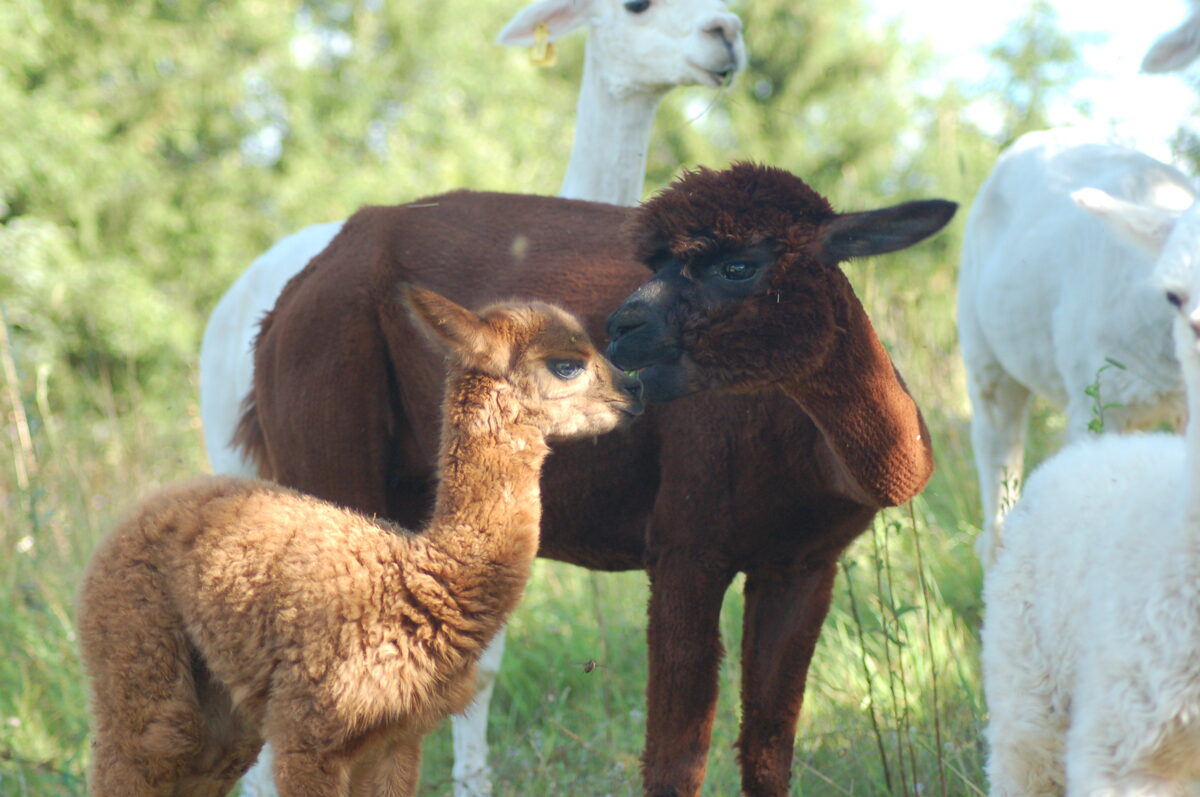 Ilvija is a great mum. 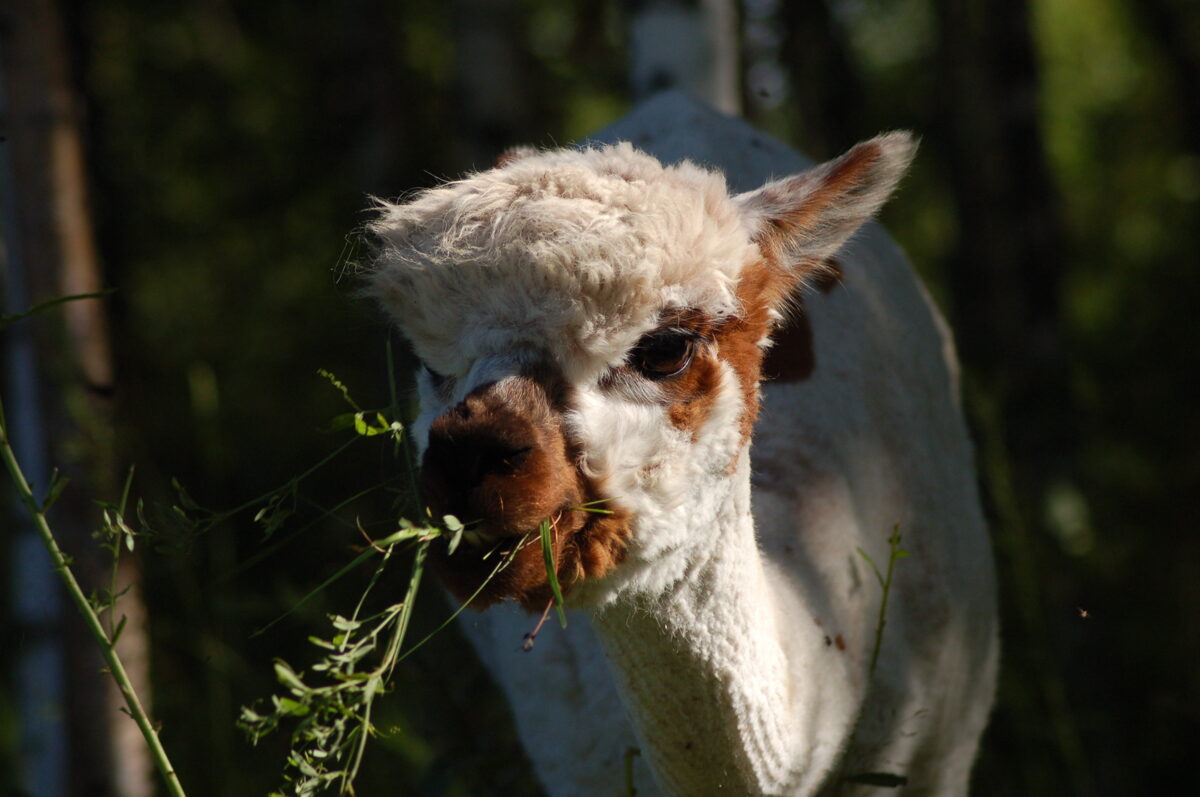 Mari enjoying the wide variety of plants on the oak tree hill. 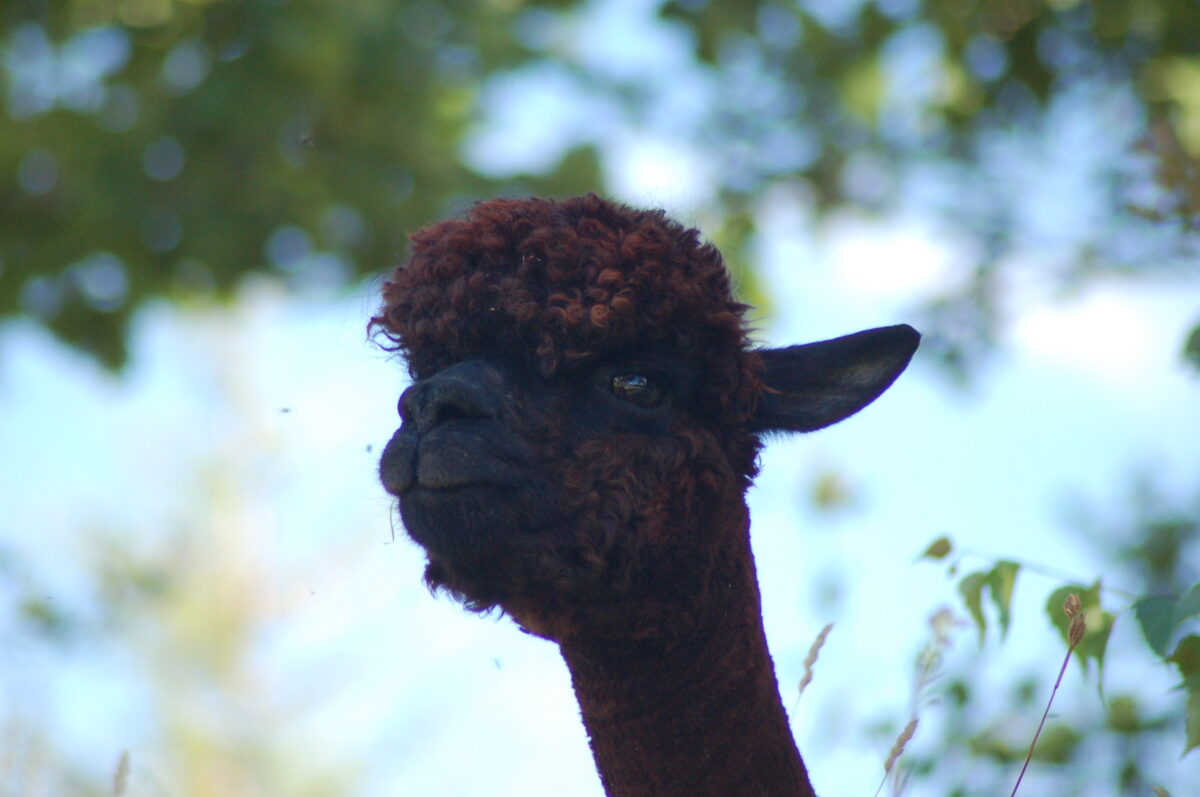 Chanel is a very proud Grandmother, can be a little overprotective of her young grandson. 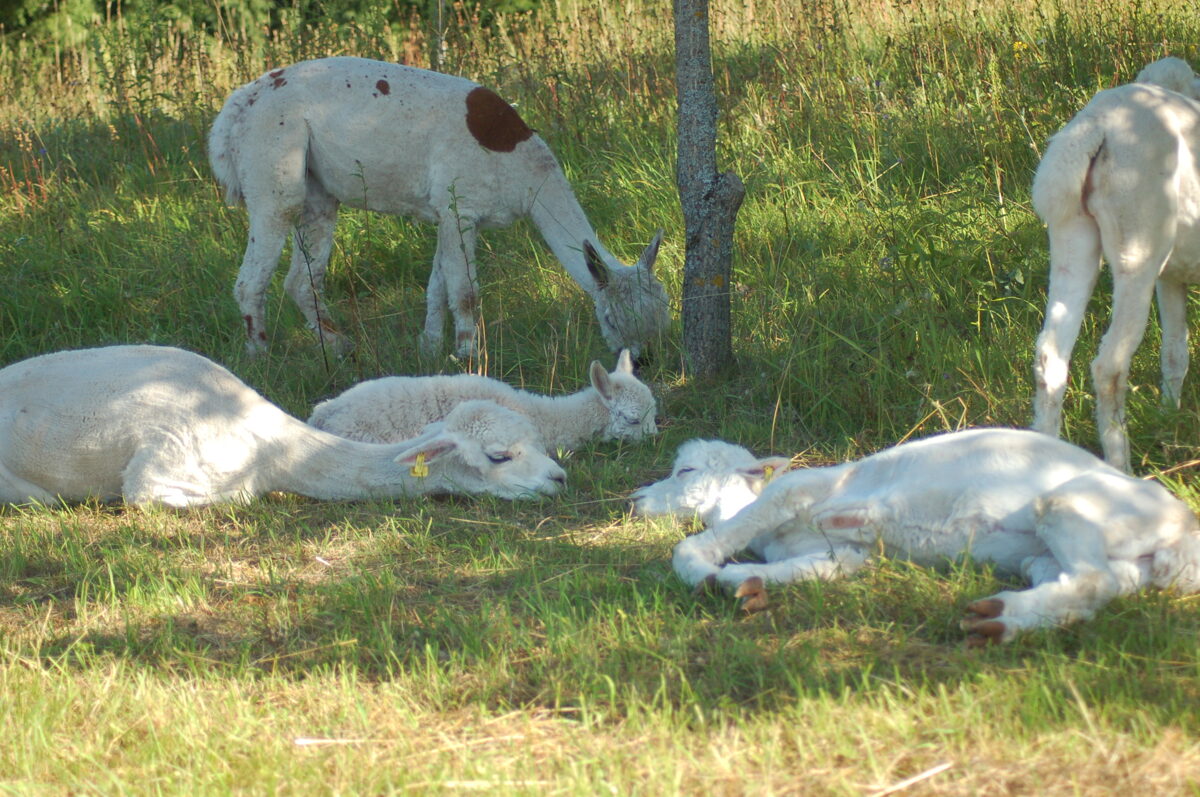 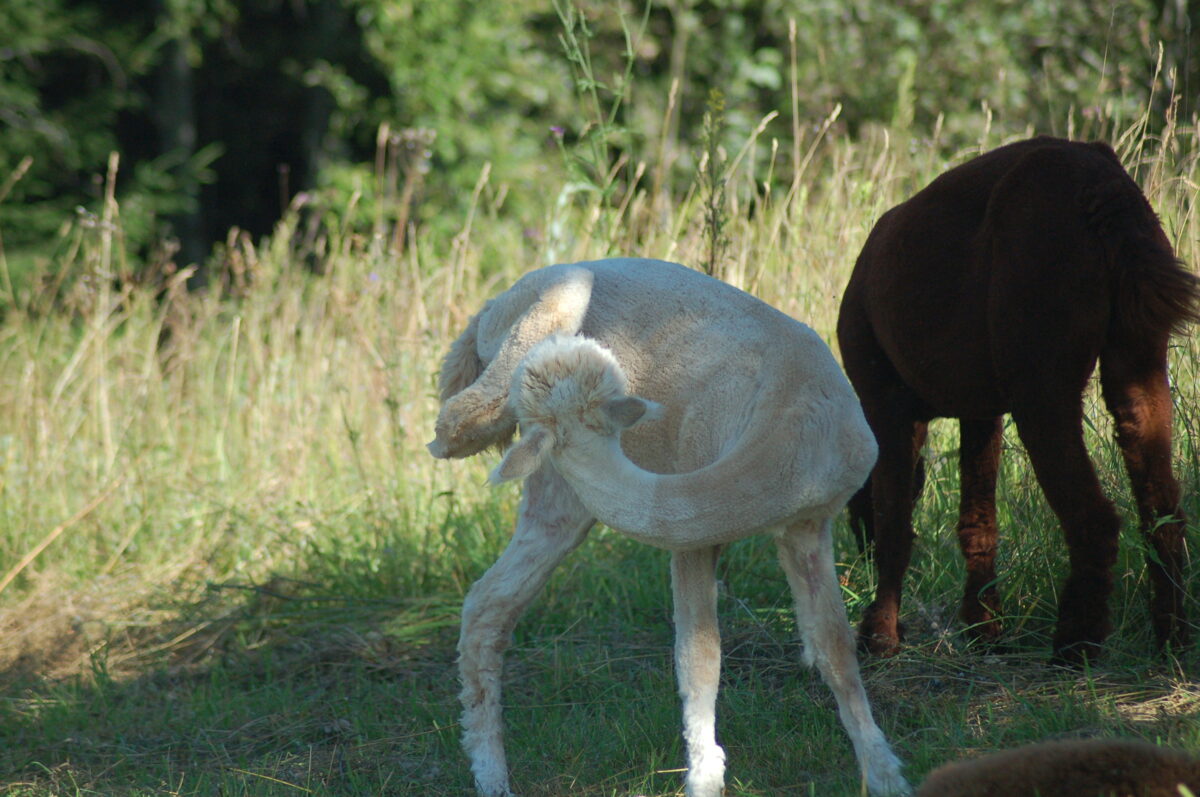 Lolly is destined to become a teacher of alpaca yoga. 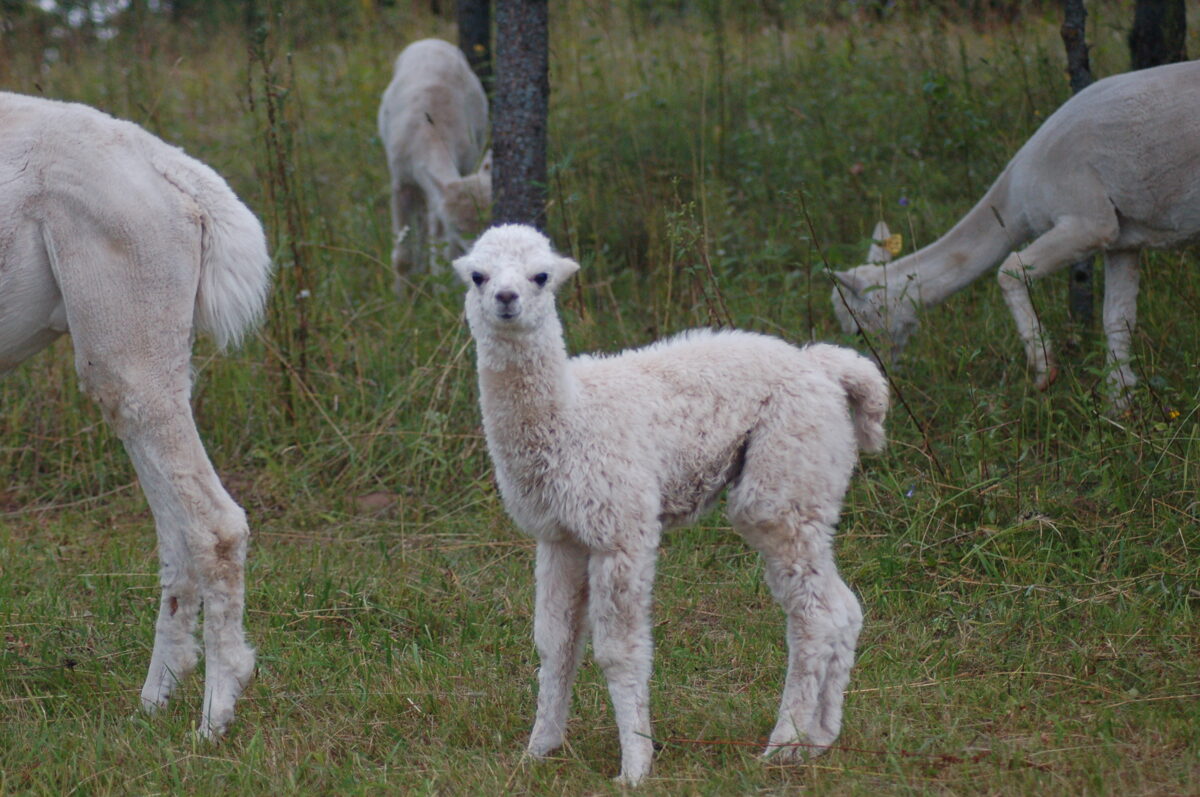 Marvin, like his sister Karla did, is growing fast and becoming very stocky and solid. 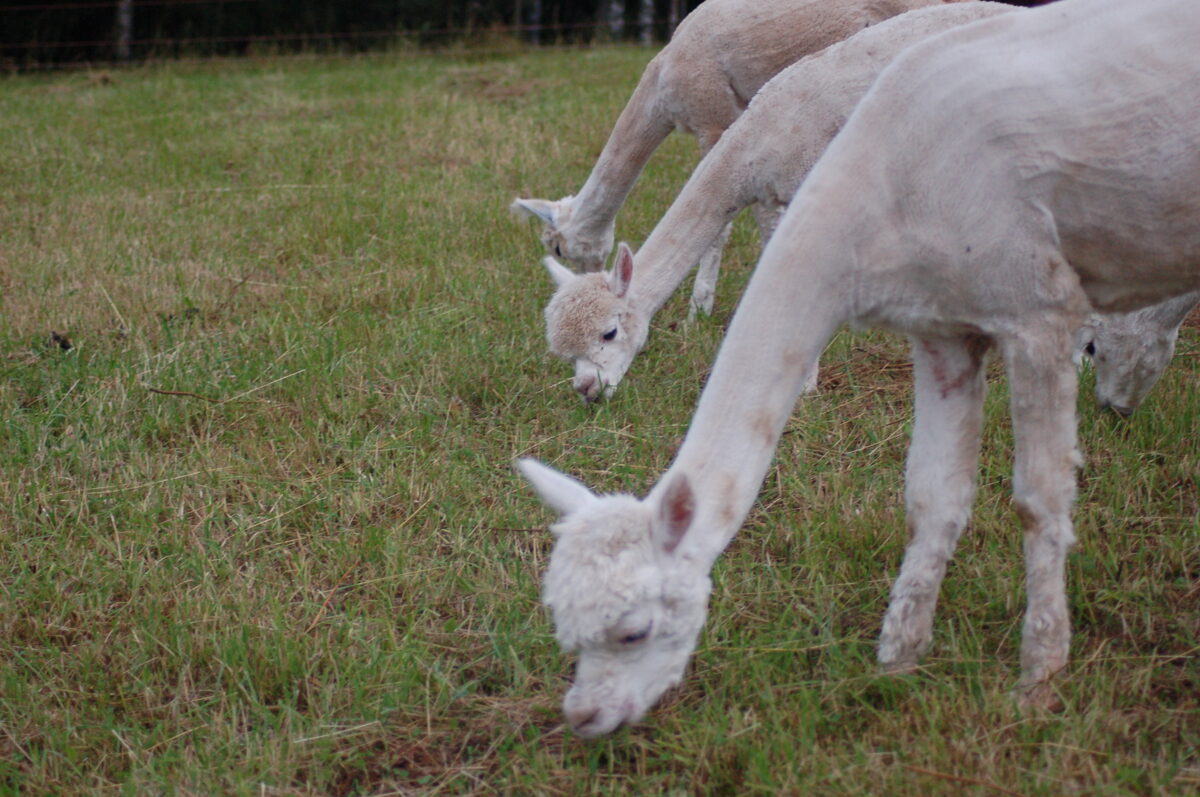 Photo finish in the alpaca eating race. I think Aggie wins by a nose from Karla and Lolly. 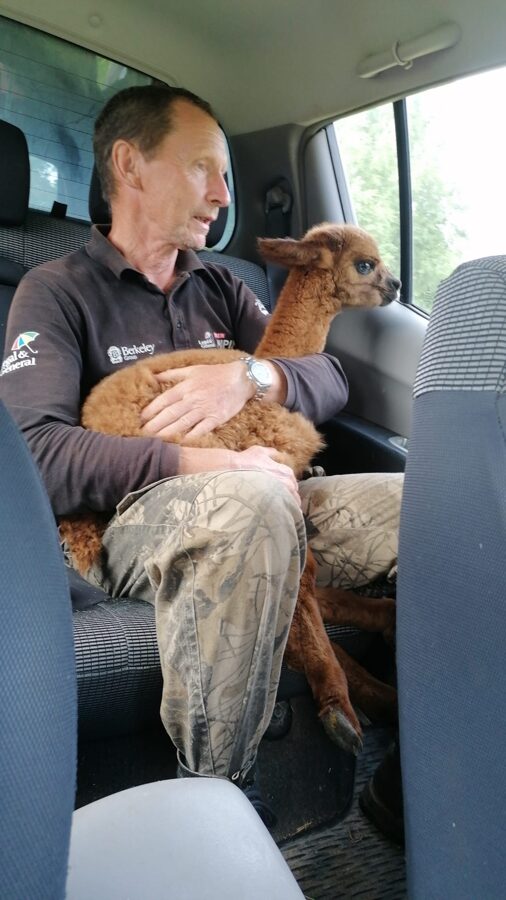 We love our alpacas so much we take them out for rides in the car, all part of their enrichment. Seriously though, this was when we took Norman to see the vet. 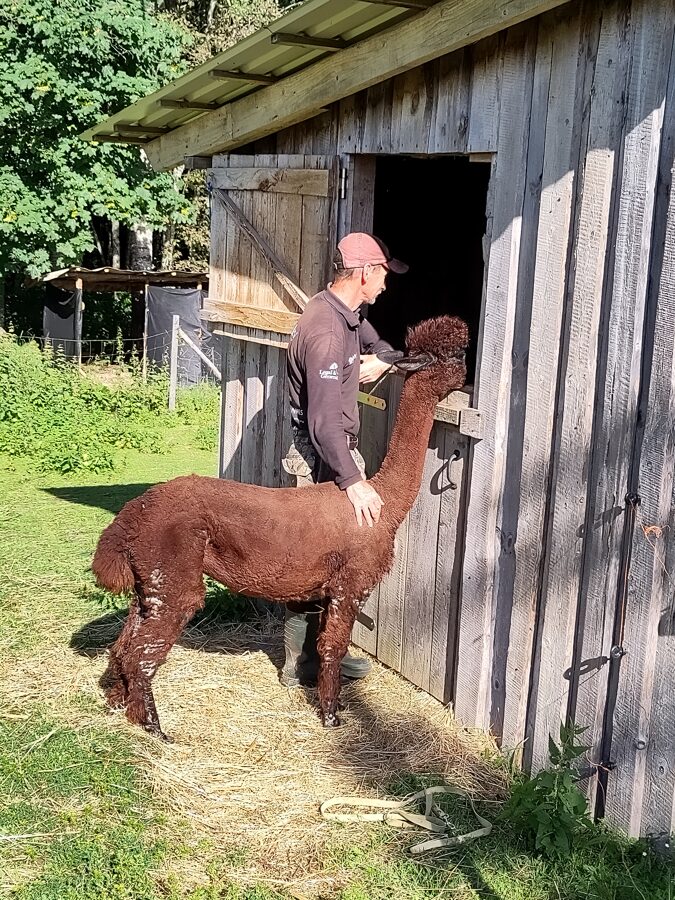 This is one of those special magical moments that don't happen too often, but you just enjoy them when they do. Mr.P and Antonia were inside mating and I was watching then Chanel came for a look. Put her head on the door next to me and we stood there for well over 15 minutes while I stroked her neck and back. At one point Mari came as well and stood on the other side. Times like these just make it all worthwhile. 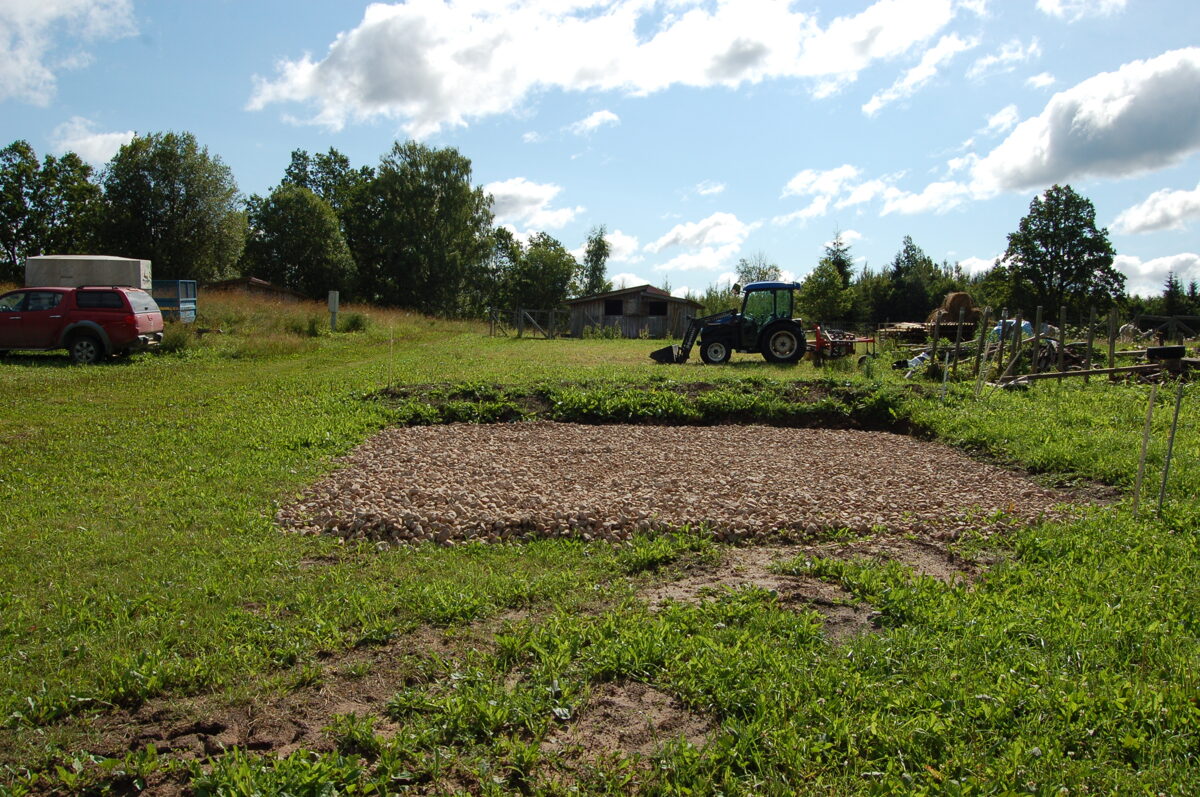 The other new arrival apart from Marv and Norm was the summer house, this is the base prepared and ready. 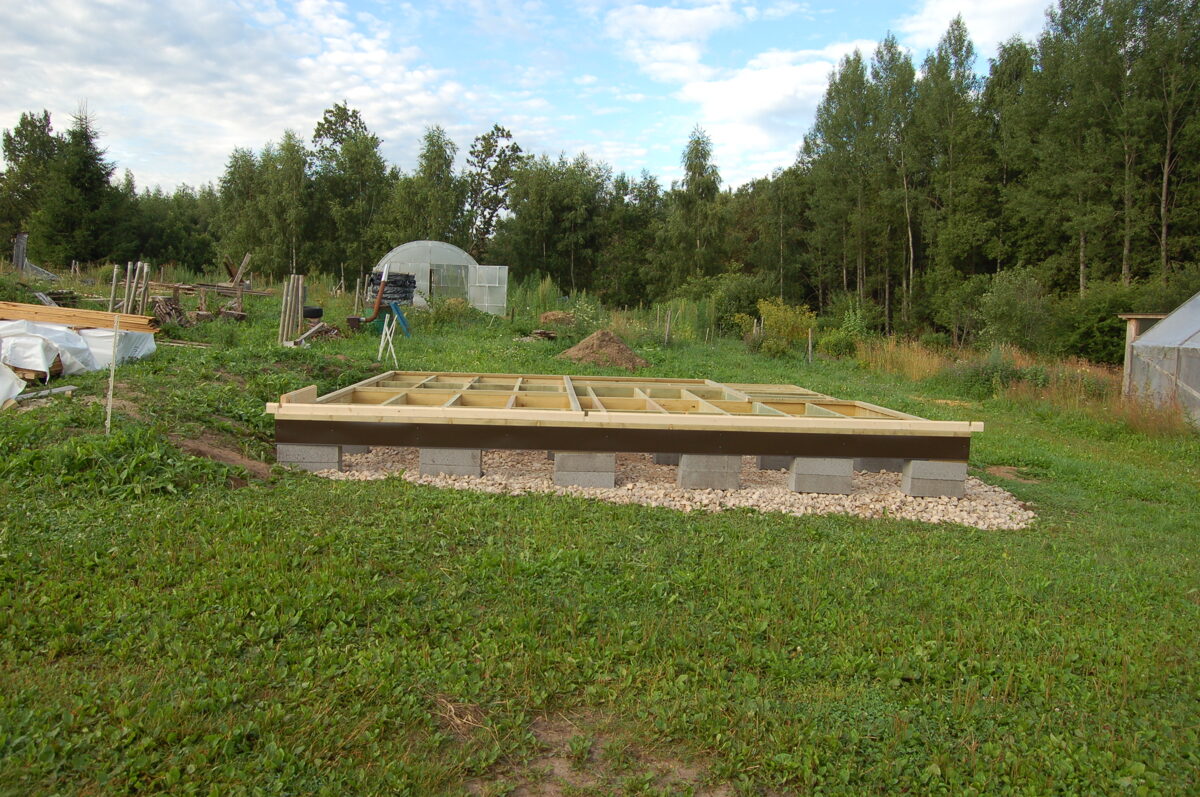 Here is the base frame mounted on blocks to keep it well off the ground. 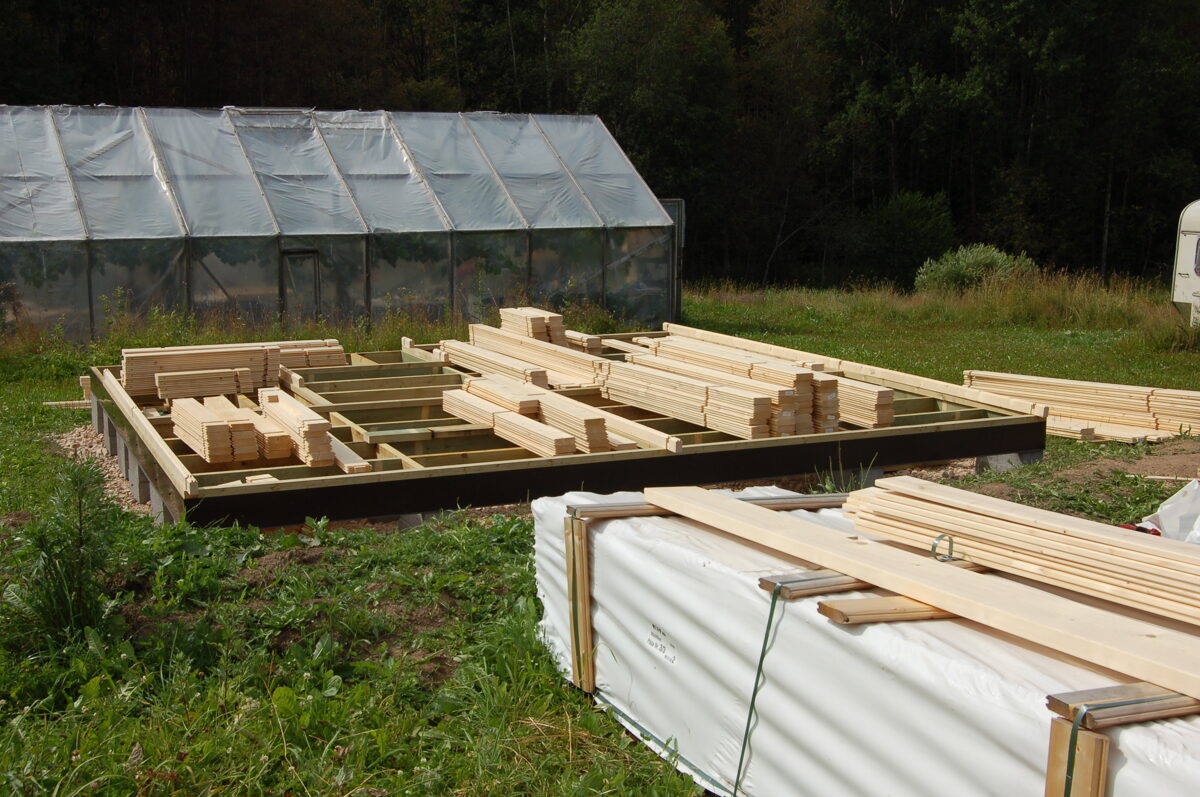 We tried to sort out the beams into the relevant groups. 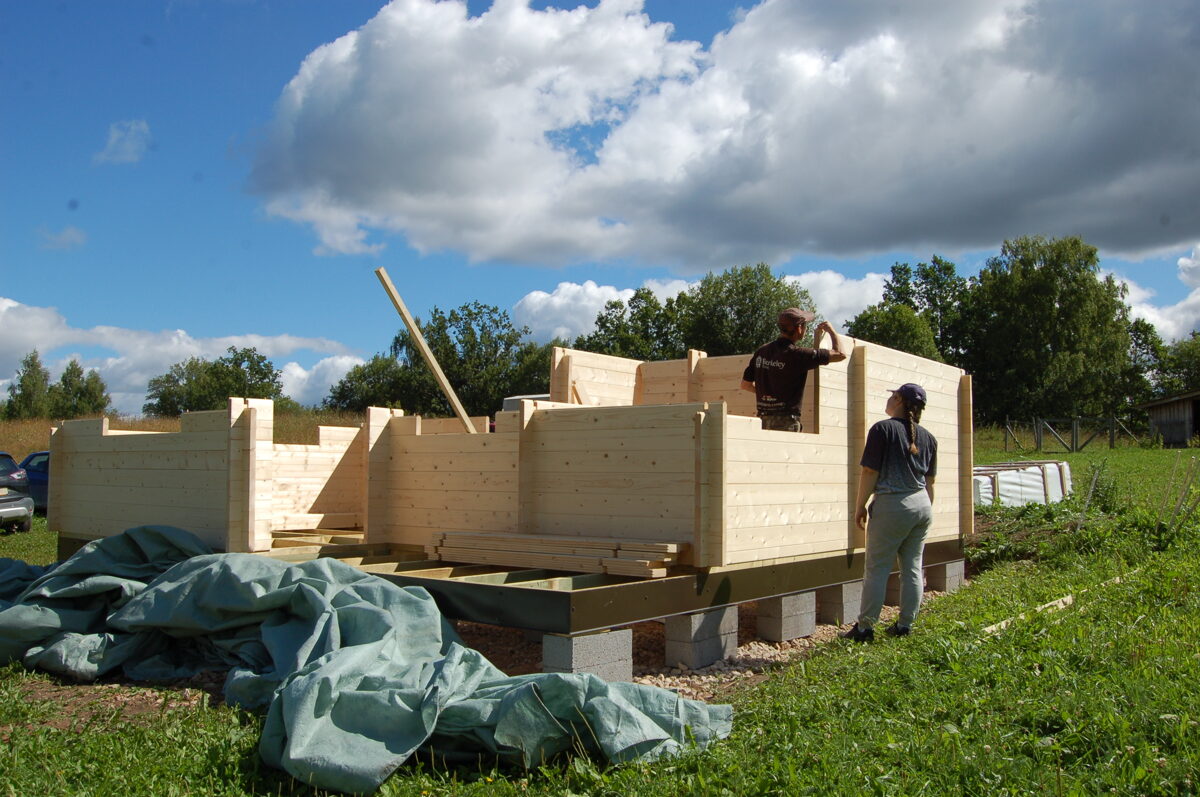 Then we began building, it's a bit like a giant lego set. This is me and my glamorous assistant Lelde, she has been fantastic. 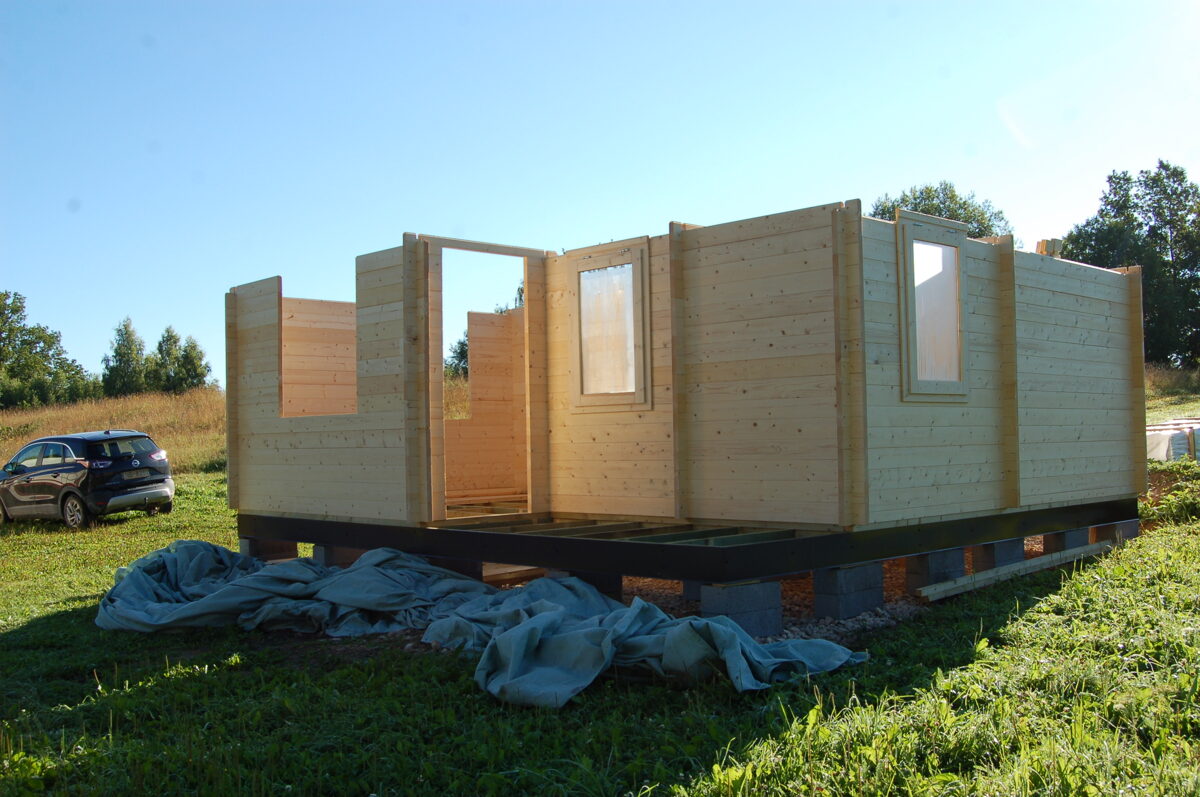 This was the easy bit done, it was getting more complicated as you started on the roof section, also more tiring as I had to keep moving the ladder around. 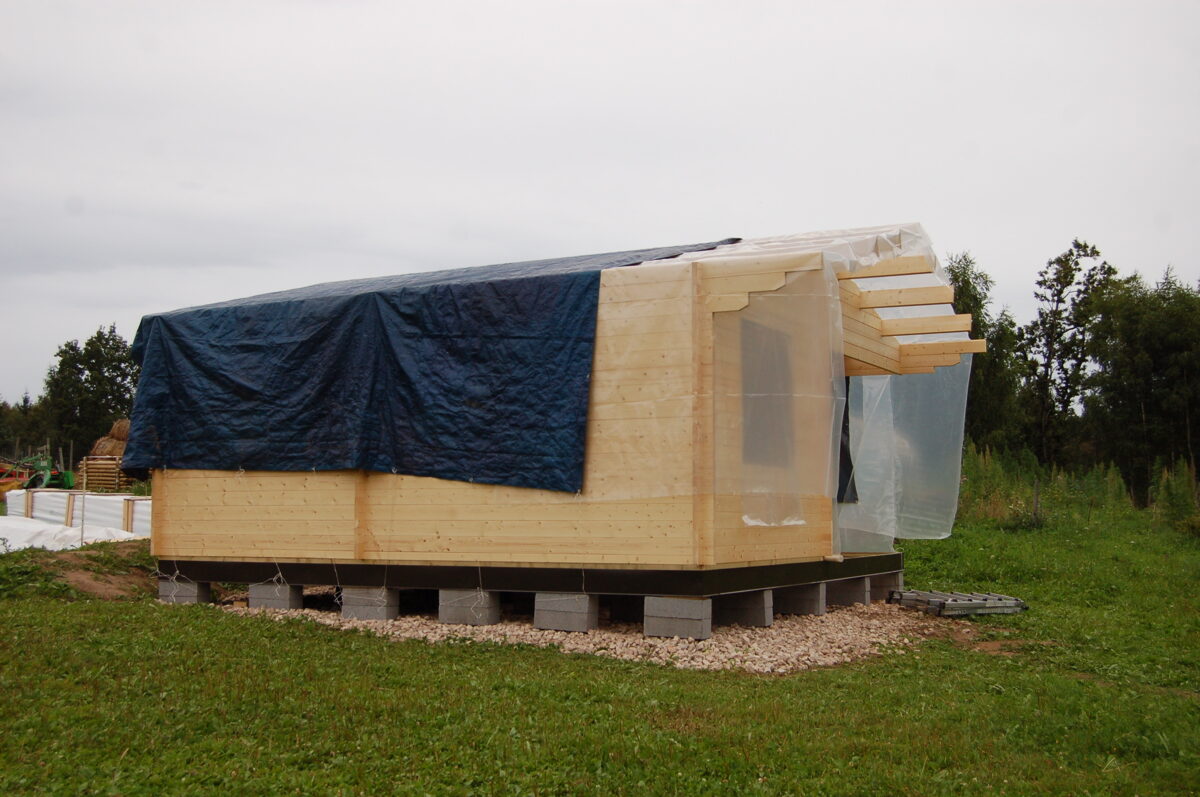 Yesterday we got all the roof beams in place, but the overnight forecast was for heavy rain so we covered it with a large tarpaulin and plastic. 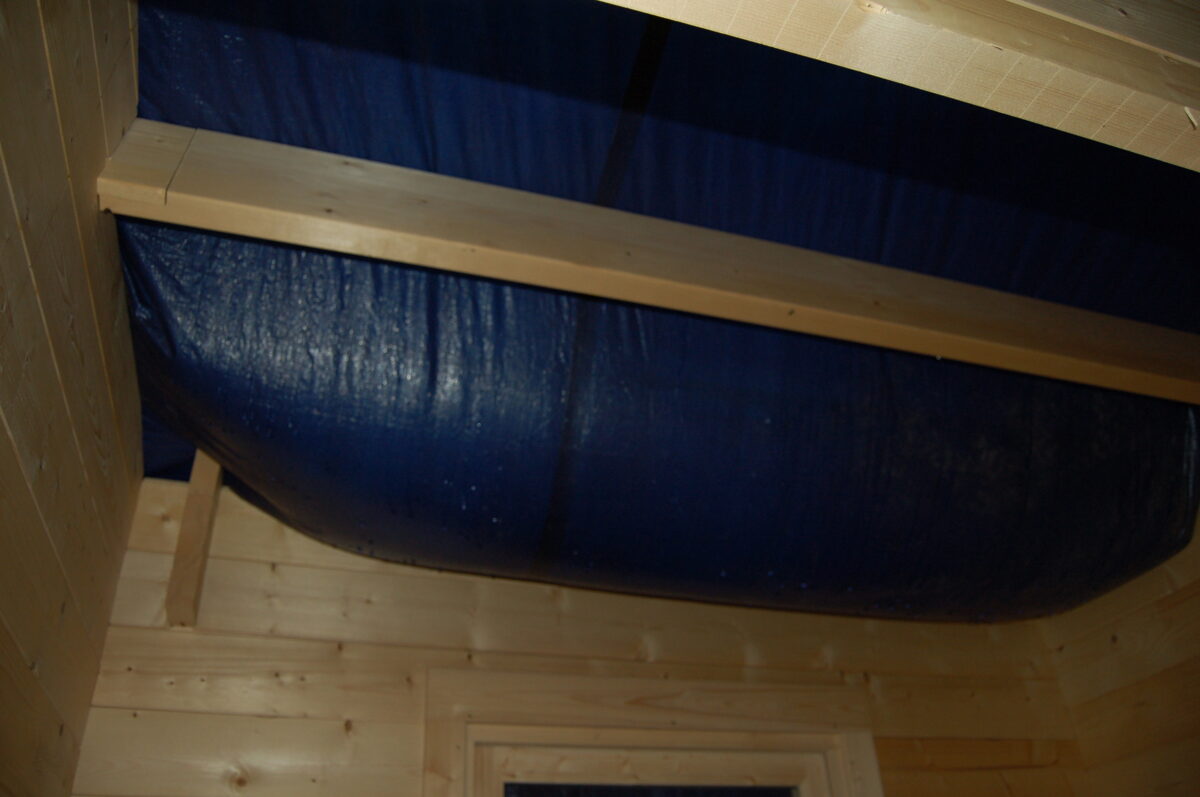