It’s been a bit of a hectic time trying to get the outside of the summer house painted before it rained. Managed to get one coat on before it rained, then had to wait till it all dried out before I could get a second coat on. But I did it, eventually….Phew. Last week I managed to get some protection on the window frames and doors, it looks nice. At least when it was raining, I could still get on with the inside, we are using linseed oil with a slight white colouring on the walls and linseed oil with pine tar for the floor.

The alpacas are now one more fence move before being confined to the paddocks for winter as there is no grass for them. I will be moving the fences tomorrow as I had an escape of the boys today. I found them all except Tellus in the orchard.

Now I am on my own at the moment as Joanna is away, so this was the plan. First thing, as always when there is an escape is “DON’T PANIC”. I tried the trays with food in to tempt them, but the grass seemed more important. OK, so next thing was go and get the girls back into their paddocks in case the boys decide to make a visit…. Done. Next go and get the long white herding poles and try to herd the boys back into their paddock…. Done. Next problem, where have the boys gone???? They were certainly not where I last saw them. Found one, Mr.P had discovered the girls and was stood outside their paddock. I managed to hold his head, as I didn’t have a harness and rope easily available, and persuade him to walk the 200 meters or so back to the boy’s paddock where he was locked in the alpaca house, he did get some food though for being good and not being too difficult on the walk back.

So where were the boys? I found them back down in the field next to the fence where they had escaped from. Next plan, get some extra fence poles and wire construct a fence to block them from heading back up to the garden and to funnel them back into their fenced area. Drop the wire on their fence and use the herding poles to get them back in…. Done…They went back in and ran straight back to the paddock. Good lads….Apart from Josefs who found the one flaw in the plan, just on the other side of the temporary fence I put up was a small gap which he found and got through and headed up to the garden. Oh well, don’t panic and get the others sorted first. Josefs was next seen by the caravan and looking like he might be heading to the girls. Yep, I was right, I know my boys too well. Next collect a harness, lead rope, and put some food in my pocket and go and get him. He was no problem as he was too interested in the girls, I put the harness on him and walked him back to the paddock, all done and dusted, all boys accounted for. I was “right chuffed” with myself apart from the fact I was soaking wet as it had started to rain.

The alpacas must sense winter is approaching as they are spending most of the day outside eating even in the pouring rain, I suppose there just isn’t the quantity or quality of grass to sustain them now. The other sign that winter is coming is that the chicken arks are now in the small greenhouse where they will be till spring next year. The awning attached to the new caravan has also been taken down, cleaned, and packed away. It looks so empty now, just a patch of dead grass, it was so useful a space, we called it the conference room. One sign of approaching winter that won’t be happening this year is the putting of the old caravan into the big greenhouse. I don’t want to risk it; the wood and plastic of the big greenhouse is not in very good condition, and I don’t want to risk it collapsing on the caravan if there is a lot of snow. So, it will be placed next to the new caravan by the side of the barn, it is also easier to run an electric cable to it from there.

As you probably know GT reappeared after nearly three months away, he is still here, and all three cats have bonded really well. You often find Betty and GT snuggled up together during the day.

I managed to take Lolly for a walk the other day, last time I did it was April, she was very good, there was just one place where the path narrows a bit, and she got a bit spooked so I decided not to push it and took her back to the paddock. I still need to halter train Karla, I will start during winter when they are inside more, makes it a bit easier.

One last reminder we will be closing to visitors from November 1st and hope to reopen April next year. So, there is not long left if you still want to come visit and learn more about the wonderful world of alpacas. 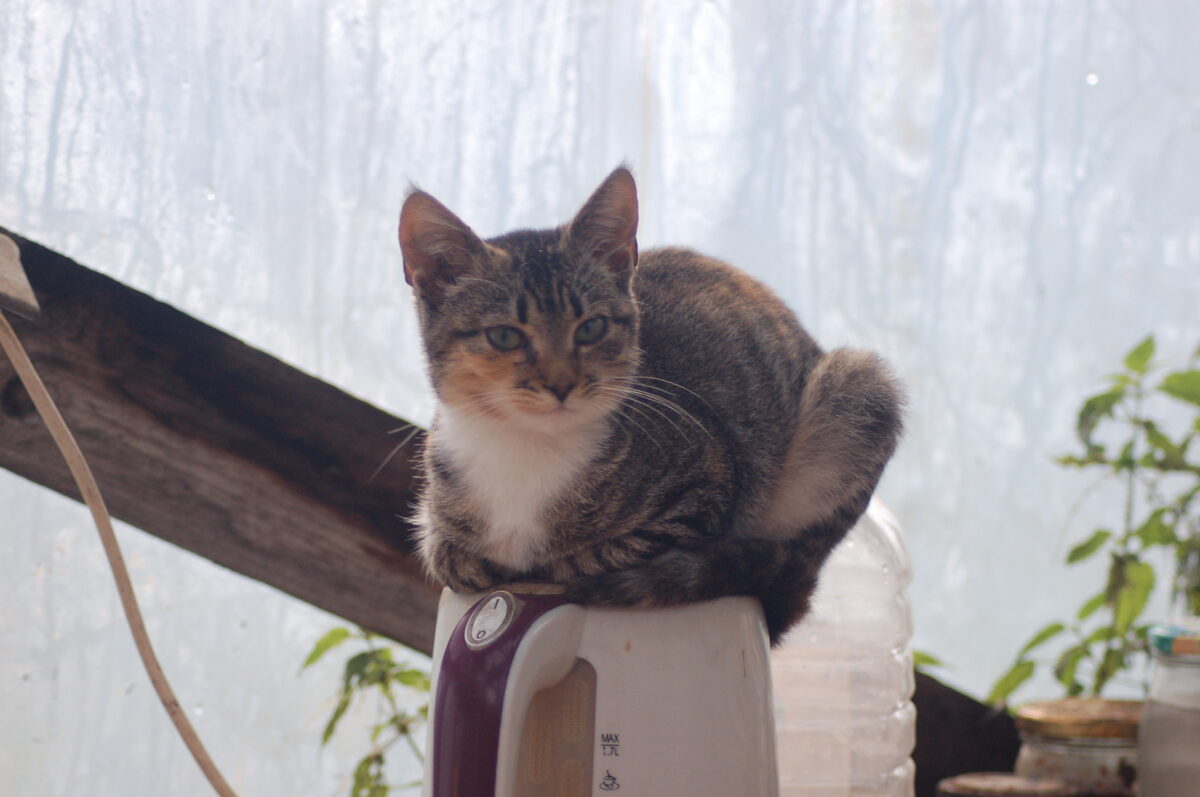 Little Betty has discovered the kettle is still warm after we have our morning coffee. 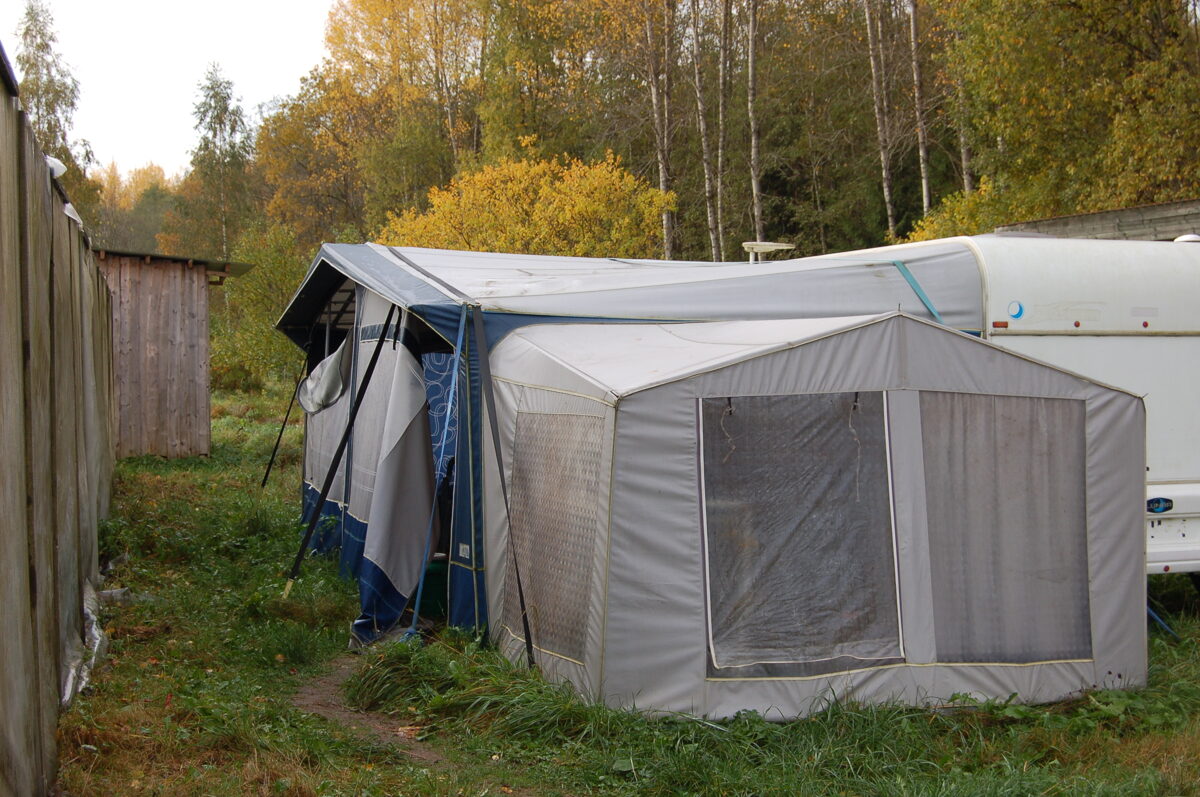 This is the awning attached to the new caravan, aka the conference room. now you see it. 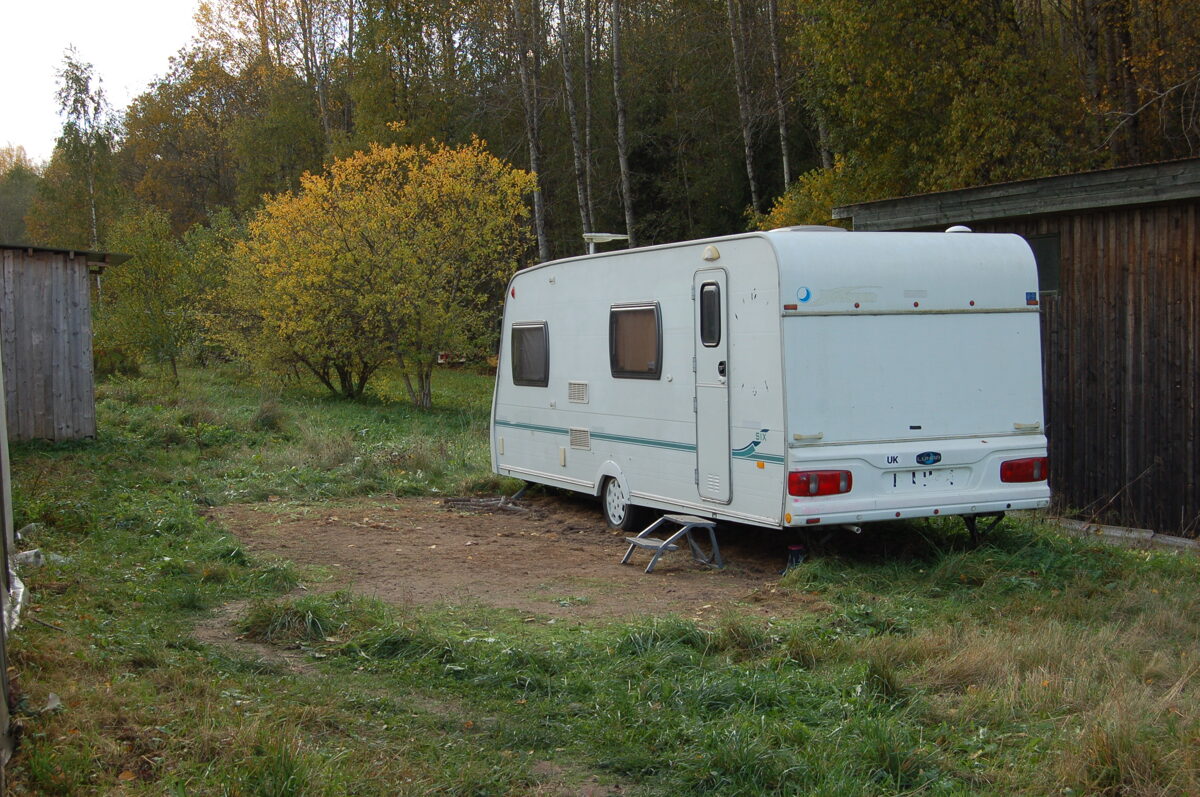 Now you don't, it has been dismantled and put away for winter. 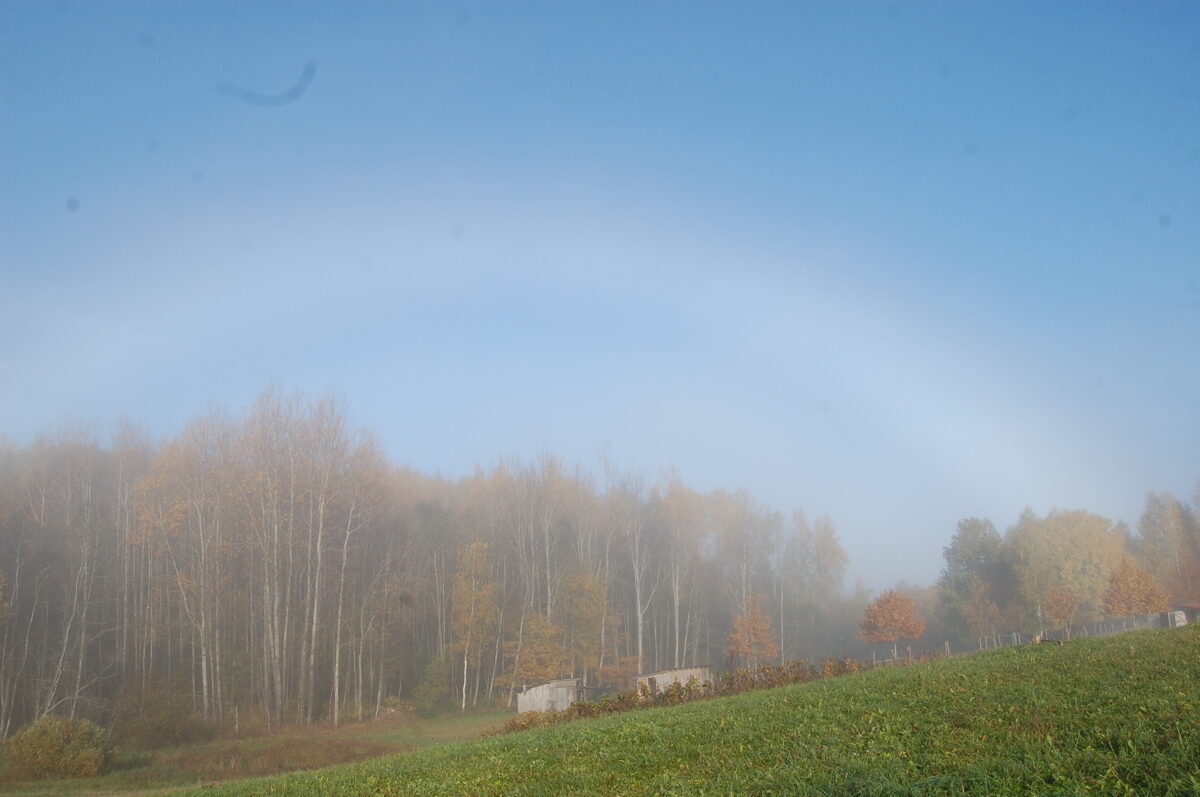 This was one morning as the mist began clear, there was a very clear fog bow, there is even the slightest hint of colours. Sorry about the dirt on the camera lens. 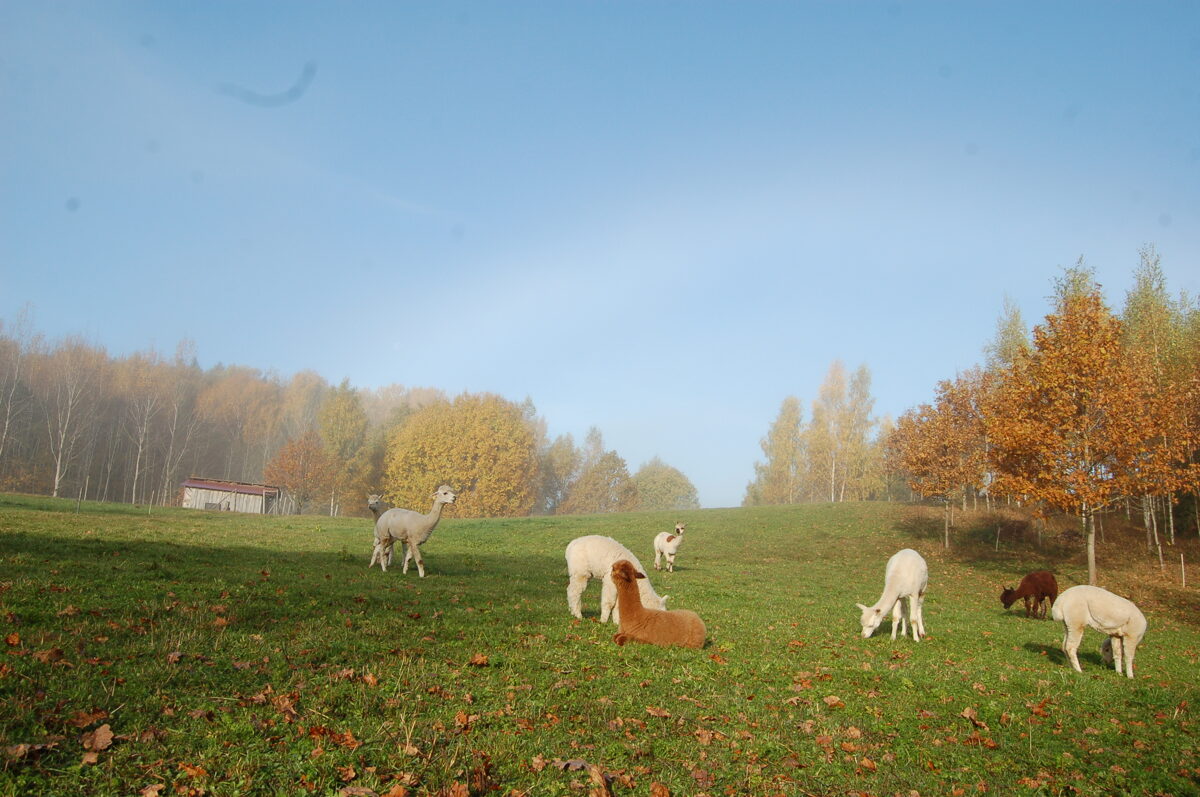 The girls (and little boys) under the fog bow. 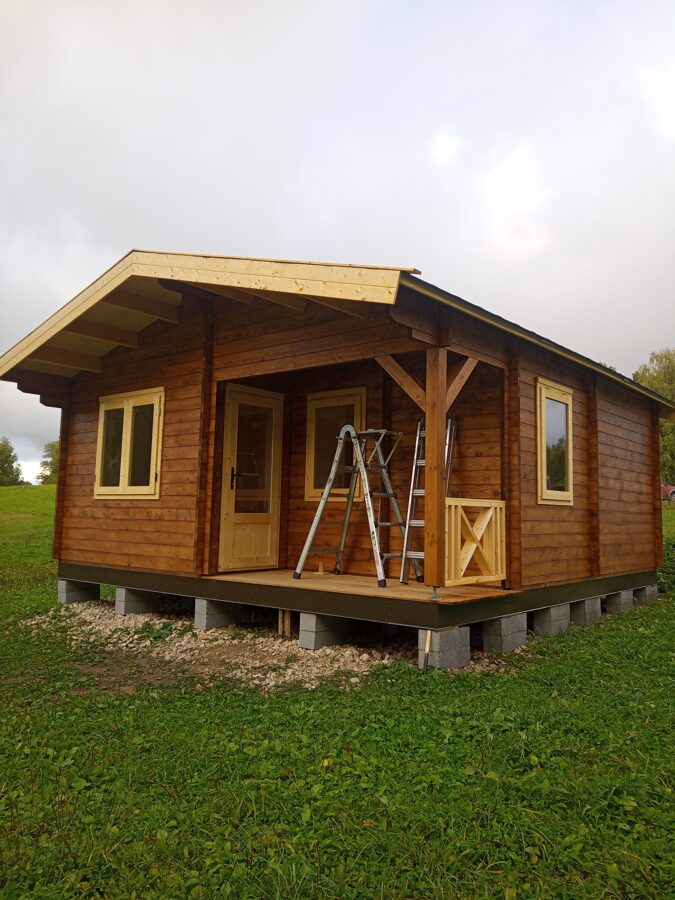 The summer house is slowly getting done, two coats of paint on the outside and since this photo I have painted the windows and door. 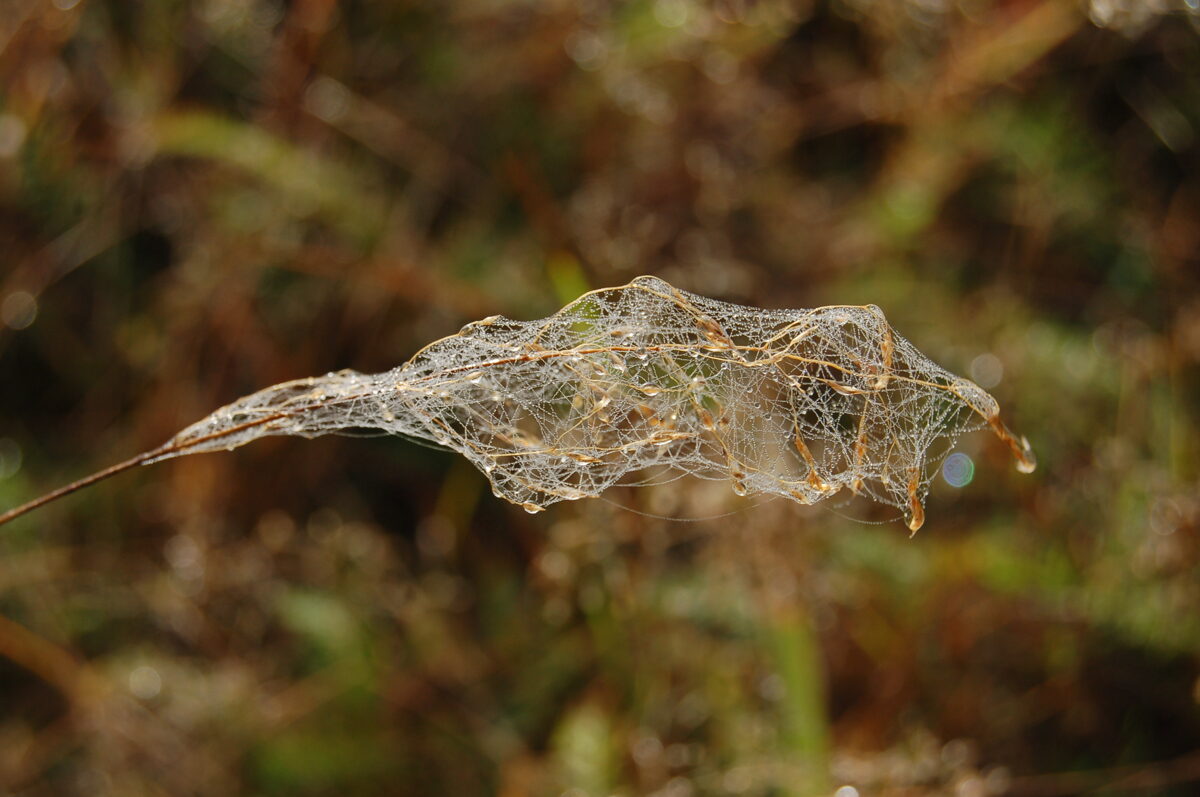 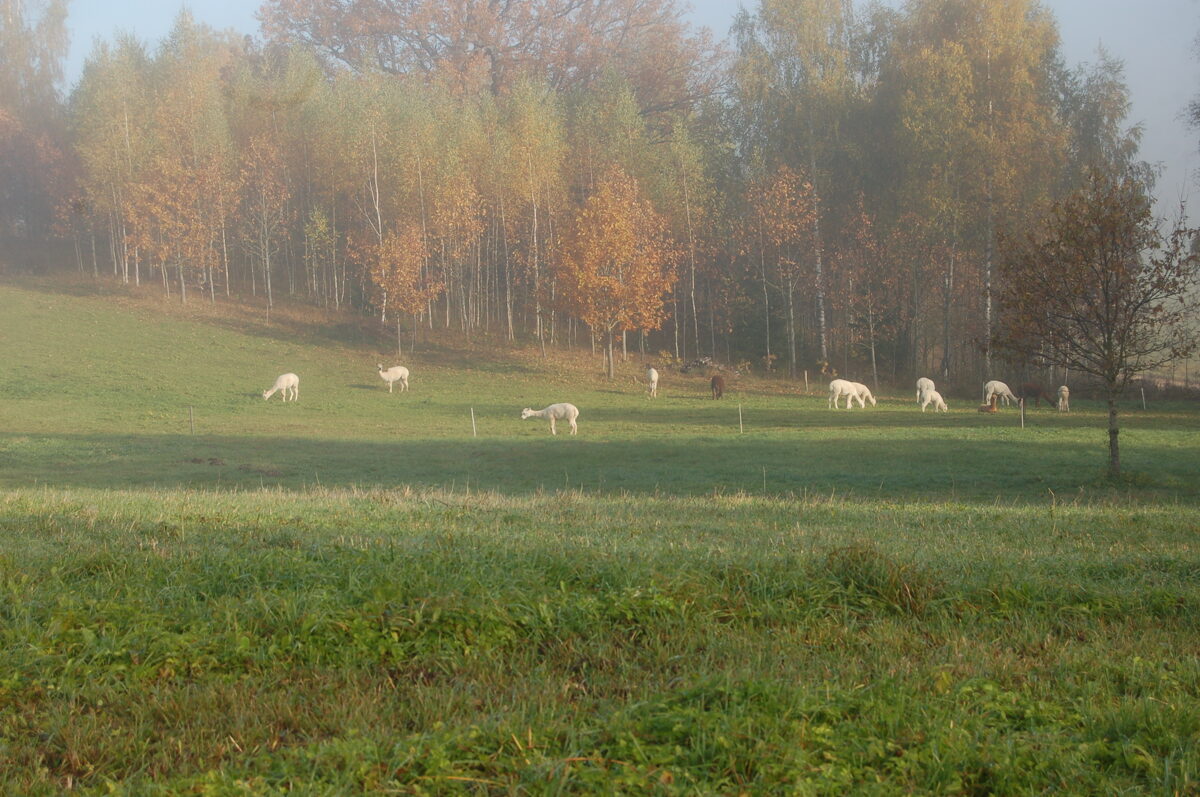 A very Autumnal looking picture of the girls. Most of the leaves have fallen off now. 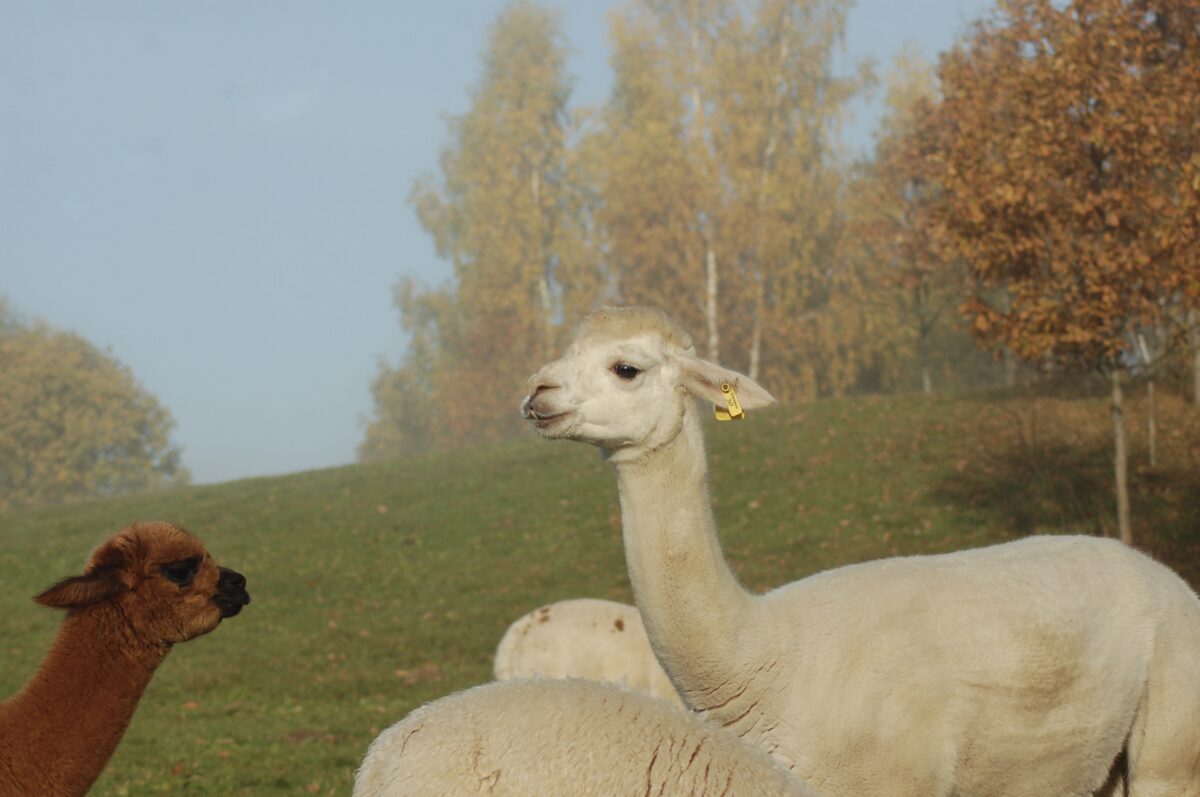 Valeria and Norman, something about the mist and the colours makes this picture look so surreal to me. 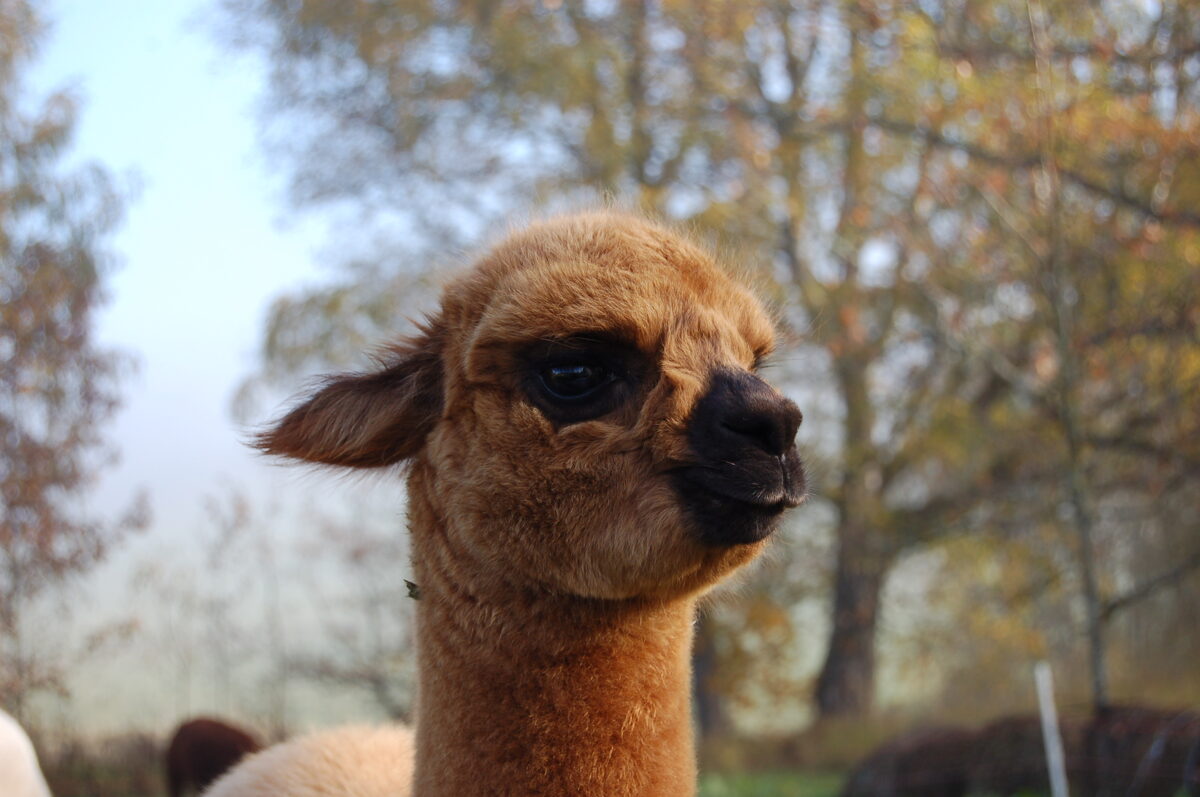 Norman is very much like his dad, George, and is an "observer" he will stand for ages and watch you, you feel like he is planning something, quite freaky really. 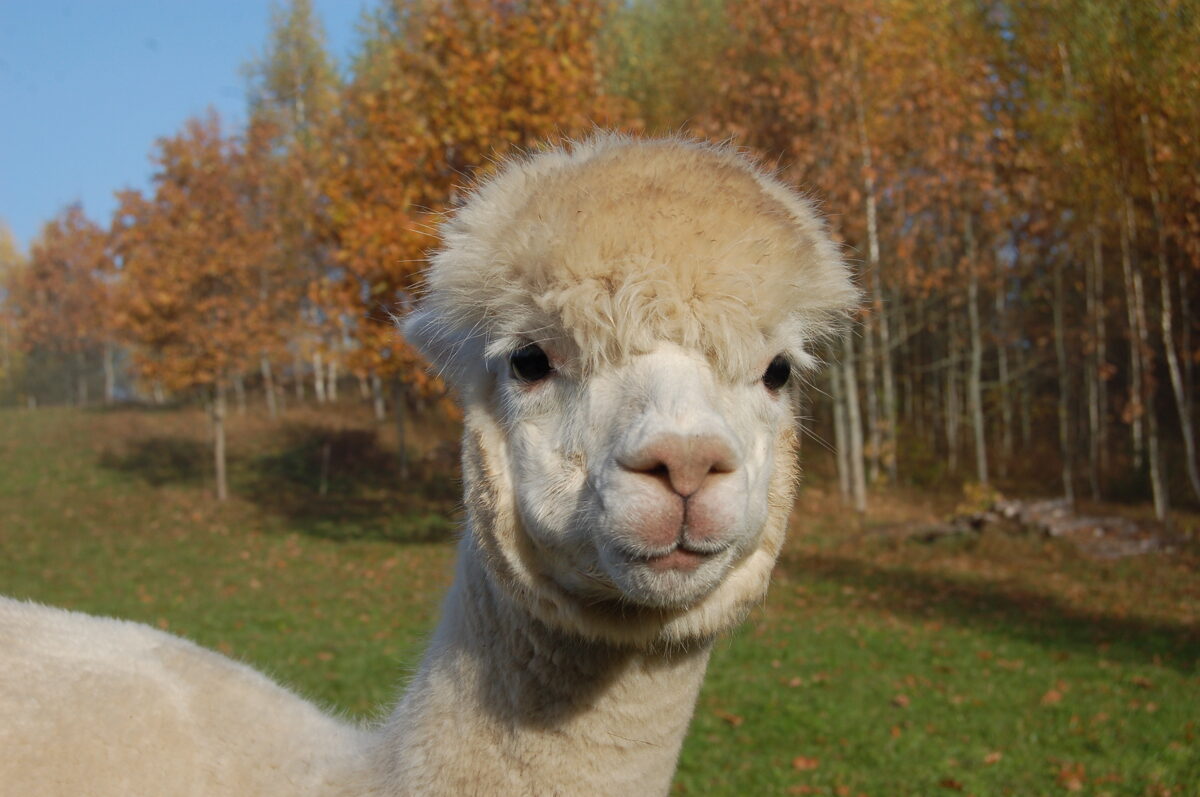 Karla on the other hand is so sweet and friendly, she likes to come up and sniff my face. 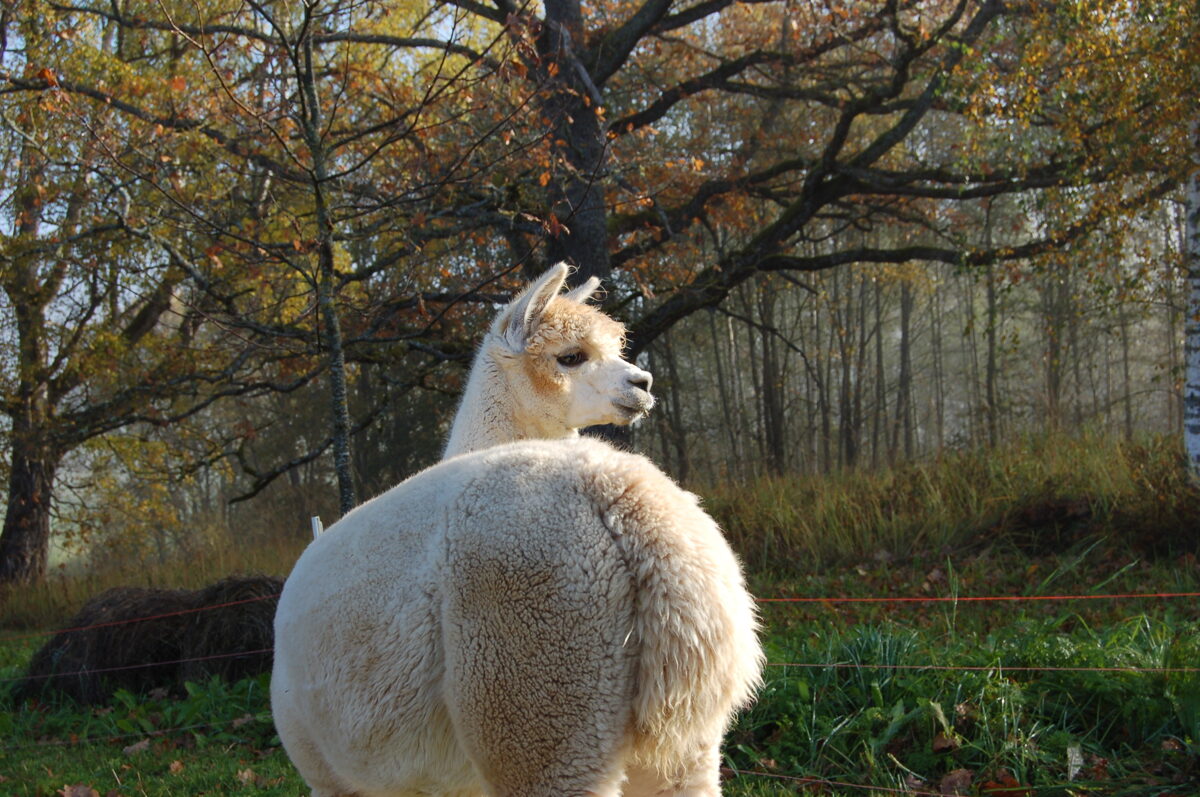 Lolly is also very sweet but I am watching her very carefully as she can occasionally jump up, I don't push her away as this only encourages her to do it again. I brace my arm and say very firmly "No Lolly" she soon gets the message I am not playing. 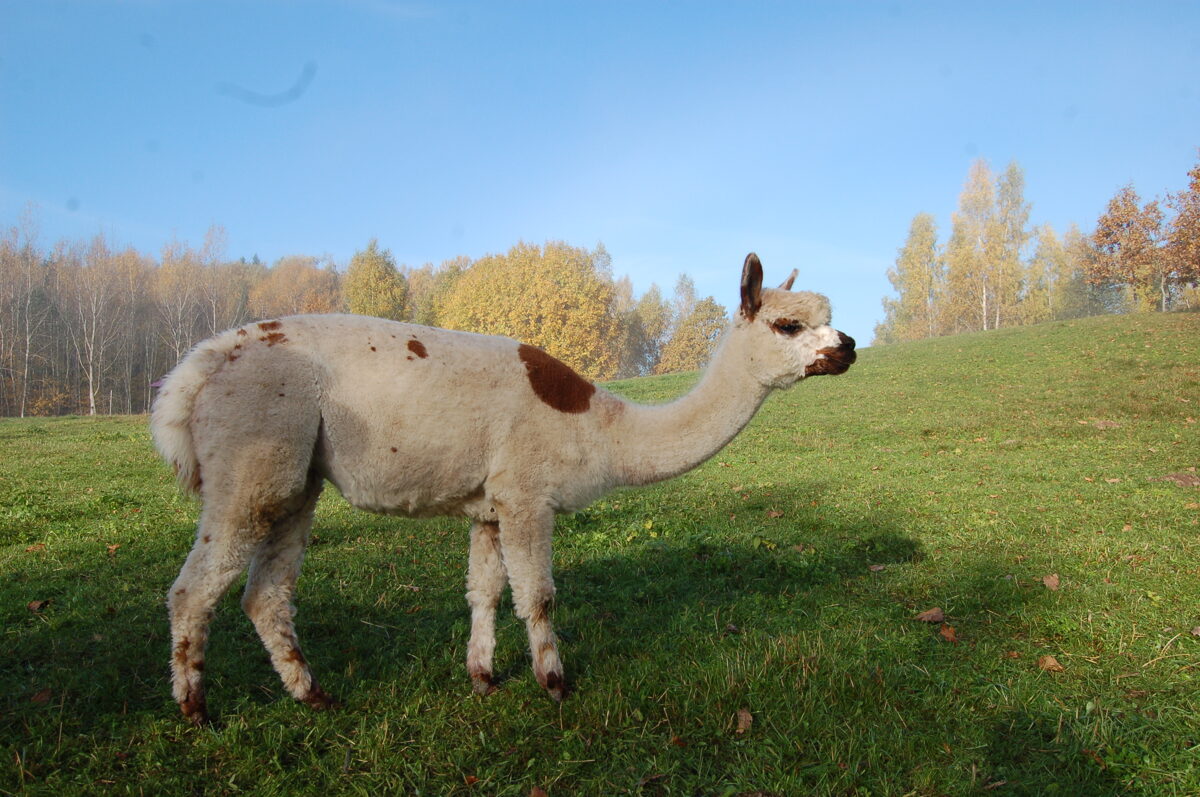 Hopefully soon we will find out if Mari may be pregnant. 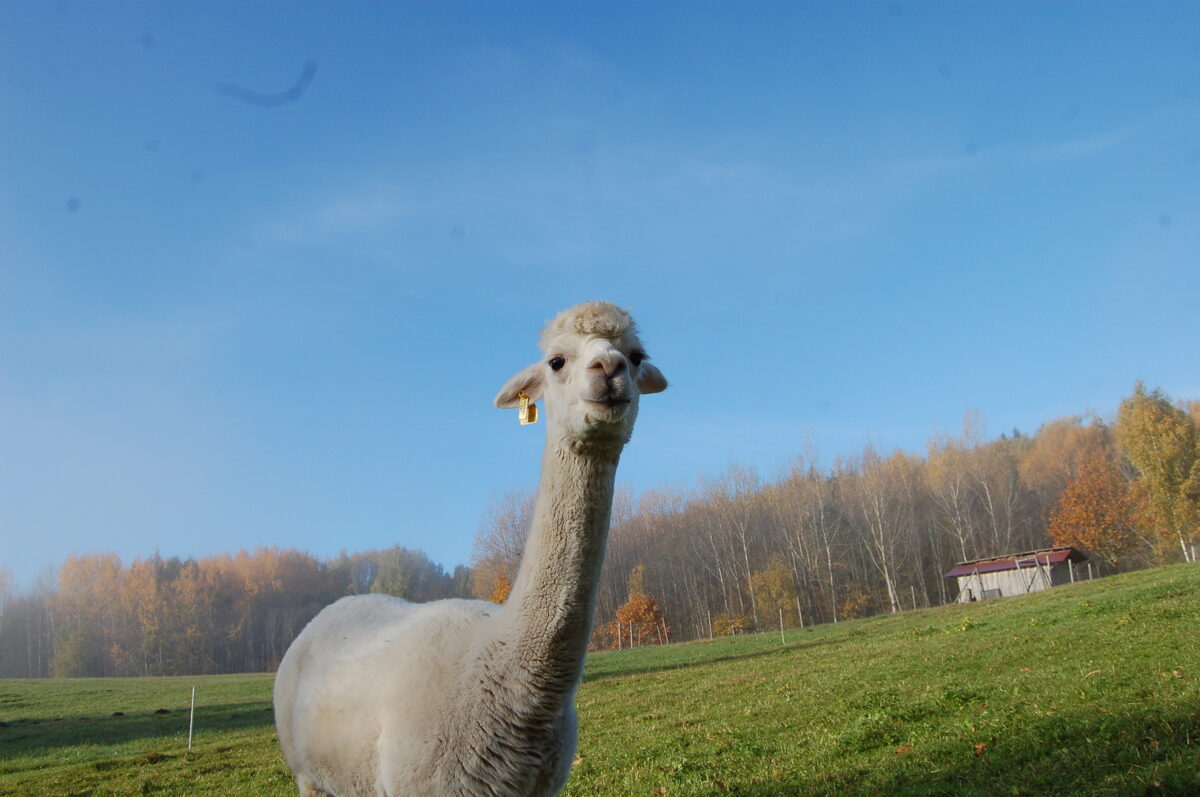 Same goes for the old lady, Vanessa, both Mari and her were mated to Josefs. 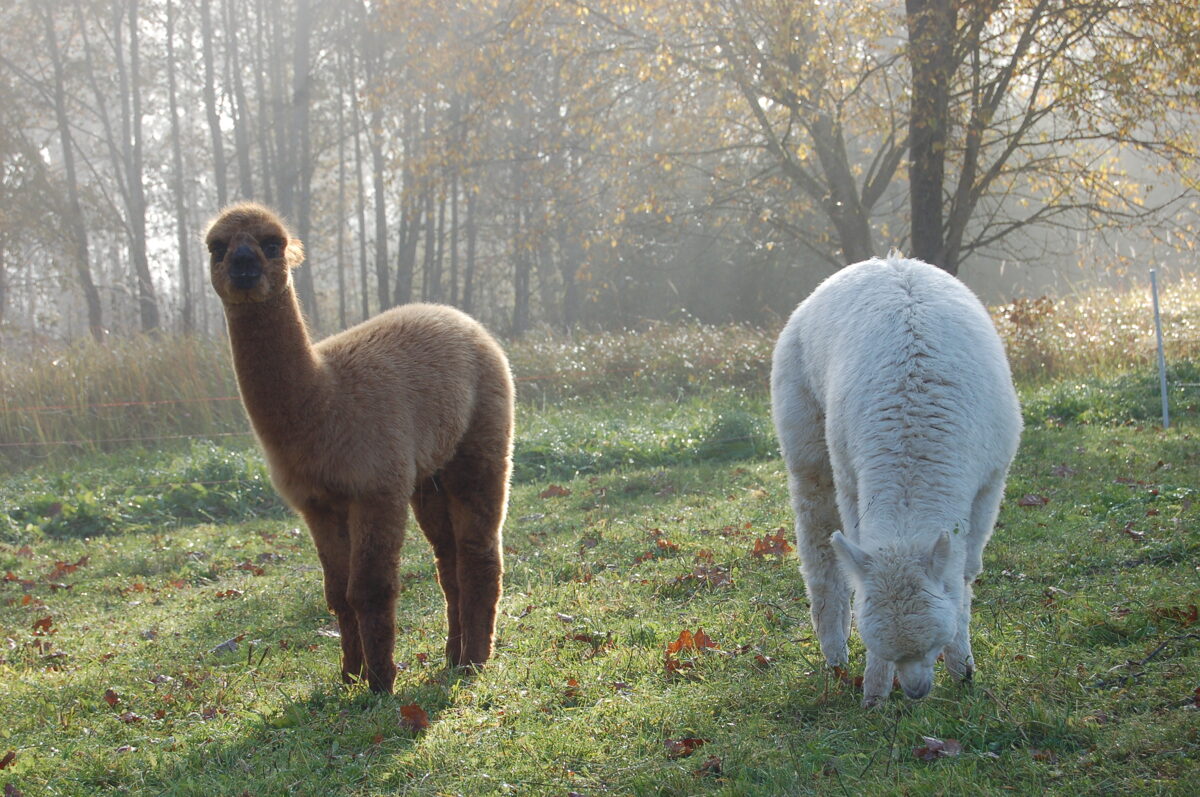 Marvin and Norman are growing fast, they are now around four and three months old. 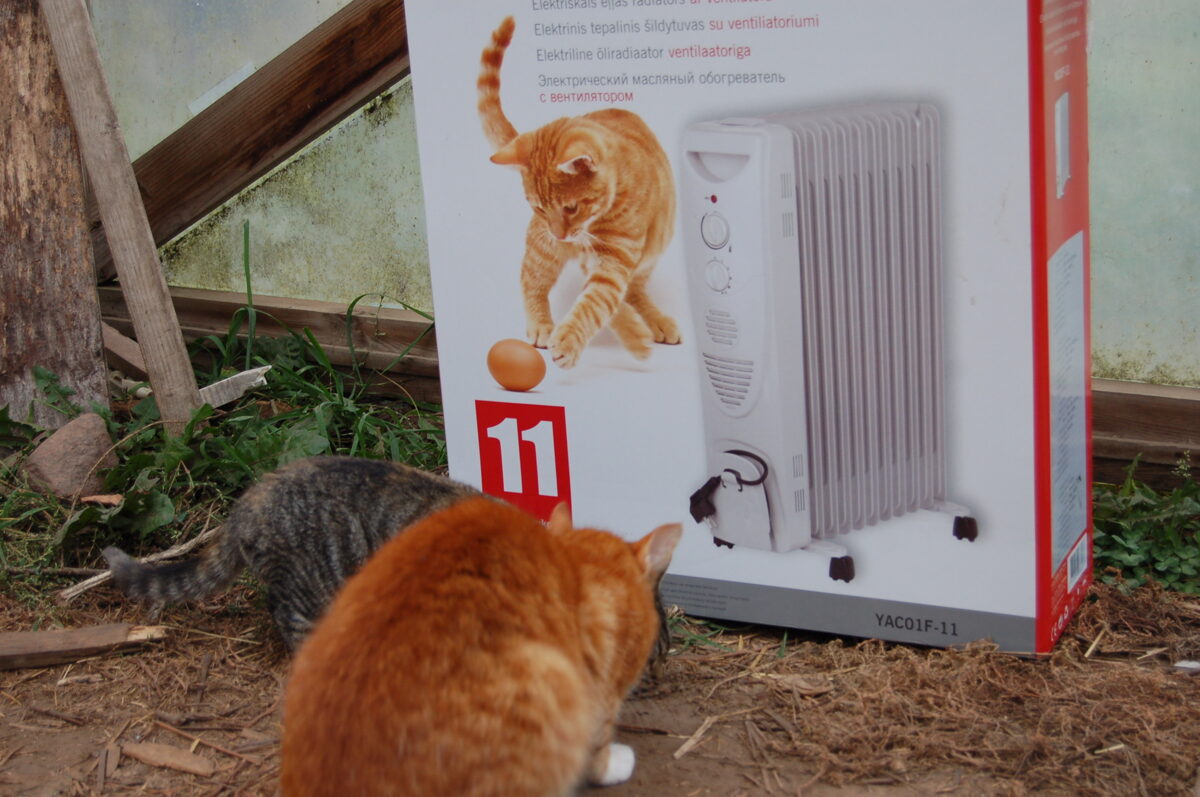 Think I might have discovered where GT disappeared too for three months. Looks like he had a modelling assignment. Here he is on the box of a new radiator we bought. 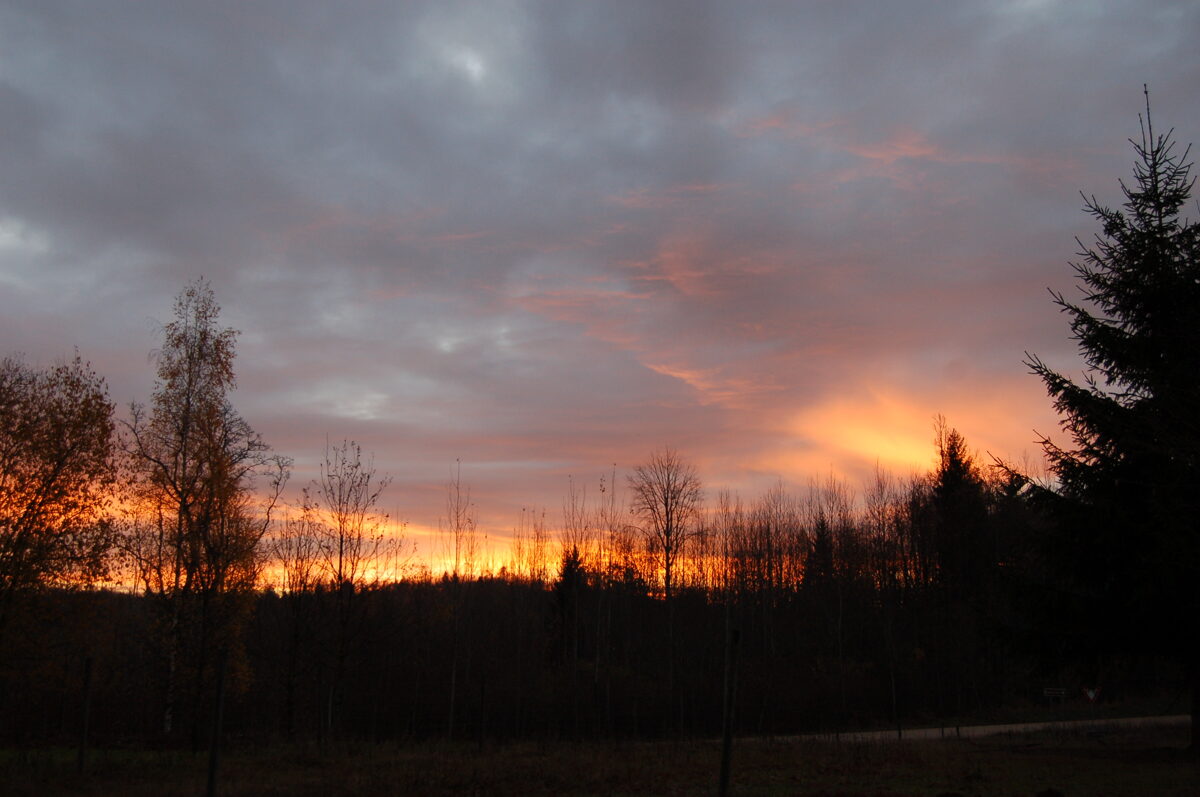 Sunrise a few days ago. 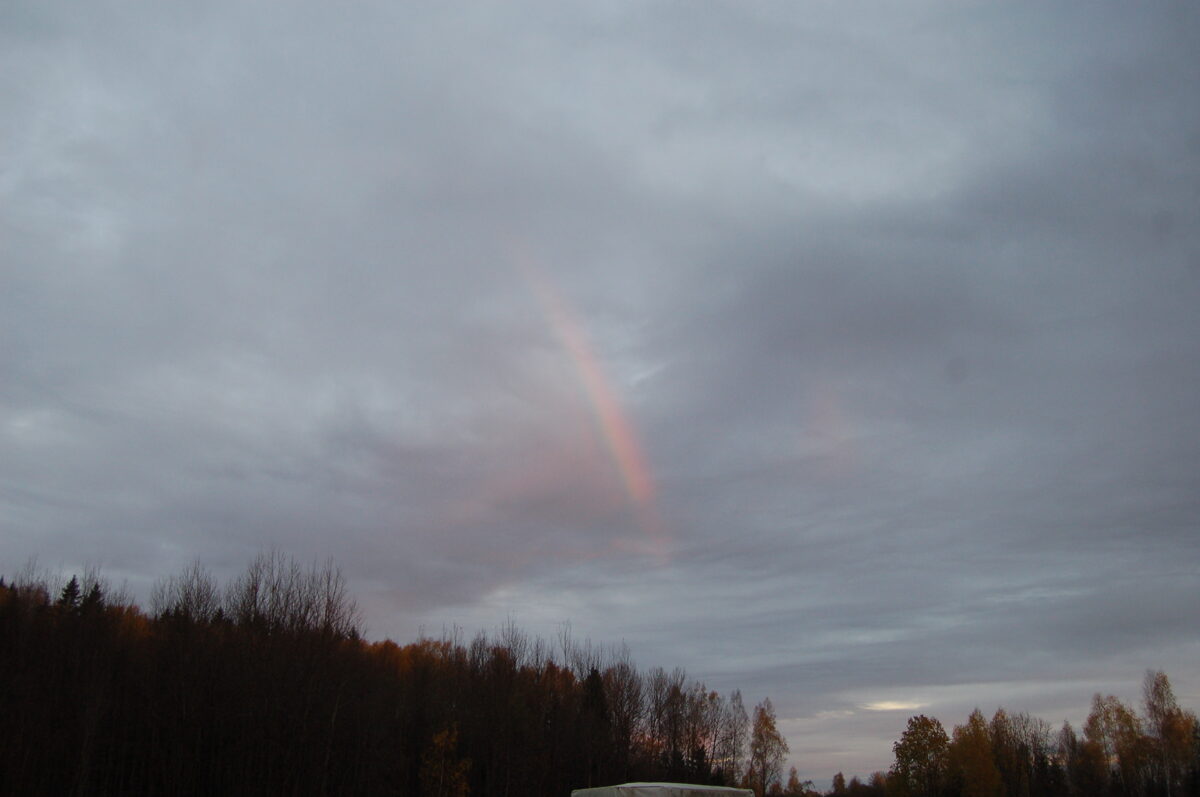 There was even a rainbow. 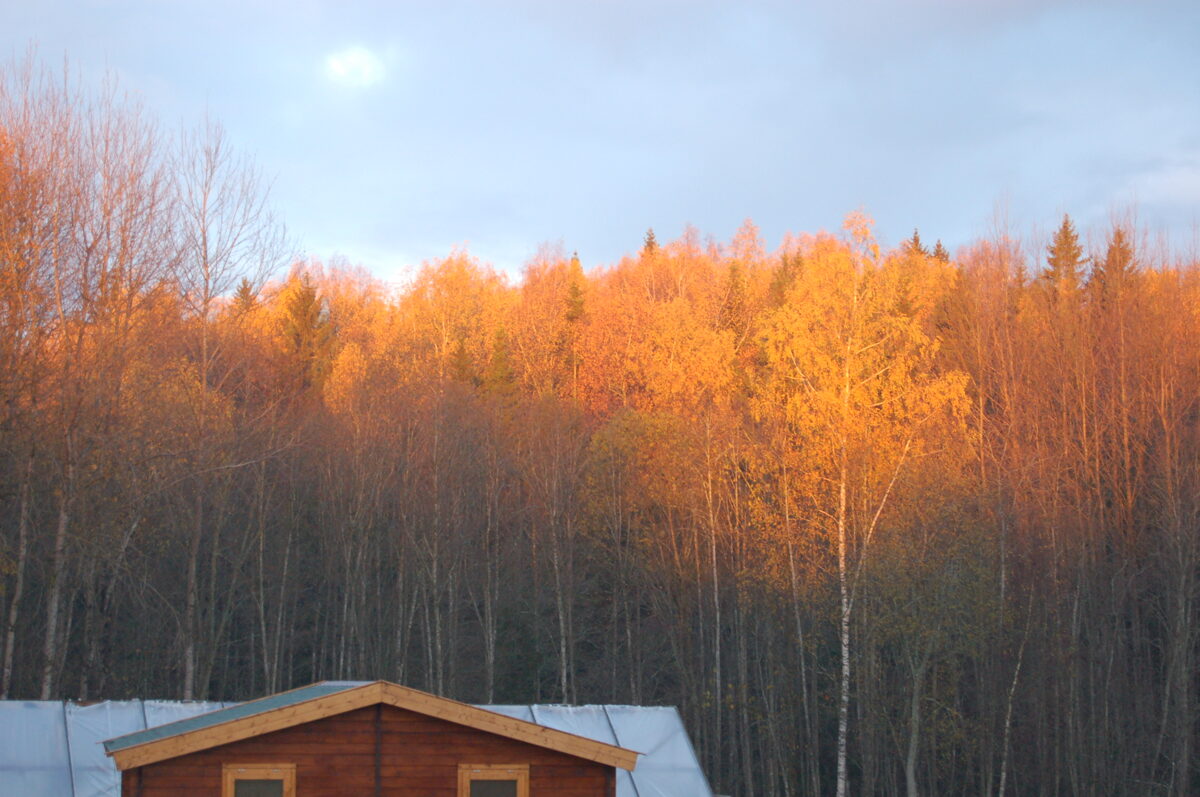 When the sun did appear it looked like the trees were on fire, the camera just does not do justice to the colours.